Mr. Atkinson is a highly decorated biostatistician and health administrator whose presence is continually felt throughout Gillings today.

Mr. Atkinson is a double Tar Heel, first earning his Master of Public Health in Health Policy and Management, followed by a Master of Public Health in Biostatistics. Among the many leadership roles Mr. Atkinson has assumed over the course of his career, one of esteemed honor is his role as Director of the Division of Vital Statistics within the CDC’s National Center for Health Statistics (NCHS). In this role, he spearheaded the dissemination of national health statistics on births, deaths, and fetal deaths.

In addition to his Director role, he also served in other national leadership positions including Deputy Director and Chief of the Registration Methods Staff for the Division of Vital Statistics; Executive Director of the National Association for Public Health Statistics and Information Systems; and Director of the NCHS Division of Information Technology. Mr. Atkinson is also highly committed to improving health data within North Carolina, having served as Director for the North Carolina State Center for Health Statistics from 1987 to 1999 and, following his retirement from NCHS, as Director of the State Center again from 2019 to 2020.

Despite his national and statewide leadership positions, Mr. Atkinson has maintained consistent involvement within the Gillings School, as he served as President of the UNC School of Public Health Foundation Board from 2012 to 2014, is a past member of the Dean’s Advisory Committee, and is a former adjunct faculty member in the Department of Biostatistics and the Public Health Leadership Program. He established the Atkinson Endowment Award, which annually provides funds to a selected student to attend Gillings. As can be seen, Mr. Atkinson is a dynamic health administrator who is passionate about health statistics and student development.

Mr. Atkinson’s impact will forever be etched in the Gillings School of Global Public Health, both figuratively and literally, as his name was inscribed in a wall in Rosenau Hall in 2005. Mr. Atkinson, the Department of Health Policy and Management thanks you for your service; and we honor your remarkable achievements!

Mr. Atkinson’s honors simply could not be contained to this short highlight. Please read more about his career here: https://www.communitycarenc.org/who-we-are/board-ofmanagers/delton-atkinson

Ms. Barbara H. Gregory is a graduate of the Department of Health Policy and Management, earning her Master of Public Health in 1978.

Shortly after the completion of her degree, she moved to London, England and worked for many years as a Health Center Practice Manager within the National Health Service.

Upon returning to the U.S., she worked as a Department Community Health Program Manager at Duke University Medical Center, now known as Duke Health, where she recently retired.

Ms. Gregory, we thank you for advancing the health of North Carolinians and those globally. The Department of Health Policy and Management commends your achievements!

Mr. Carey, affectionately known to many as a hometown hero, has been an active trailblazer in Orange County for over 35 years.

Mr. Carey began his work in North Carolina in 1972, when he graduated from the Gillings School of Global Public Health with a Master of Arts in Public Health Administration. He later went on to earn a Juris Doctorate from the North Carolina Central University School of Law in 1980, launching a career that sat uniquely at the intersection of health and justice.

Mr. Carey has an extensive range of professional experience, having held several positions including Clinical Assistant Professor at UNC Chapel Hill and Chair of the North Carolina Employment Security Commission (NCESC). Following his time at the NCESC, Mr. Carey served three years as Secretary of the North Carolina Department of Administration.

Mr. Carey is a passionate leader who cares deeply about uplifting the communities he’s a part of, exhibited by his 18-year tenure as Executive Director of Piedmont Health Services, Incorporated, a federally qualified health center providing quality care to 14 counties across North Carolina.

Mr. Carey has also had a successful career in county politics, serving 6 terms as an Orange County Commissioner and 11 terms as Chairman. Mr. Carey has also shown a deep commitment to state level politics through his role as President of the North Carolina Association of County Commissioners, the first African American to serve in this capacity. Until his retirement, Mr. Carey worked tirelessly to advance health equity and justice for vulnerable communities across North Carolina.

Mr. Carey, the Department of Health Policy and Management honors you for your groundbreaking accomplishments! 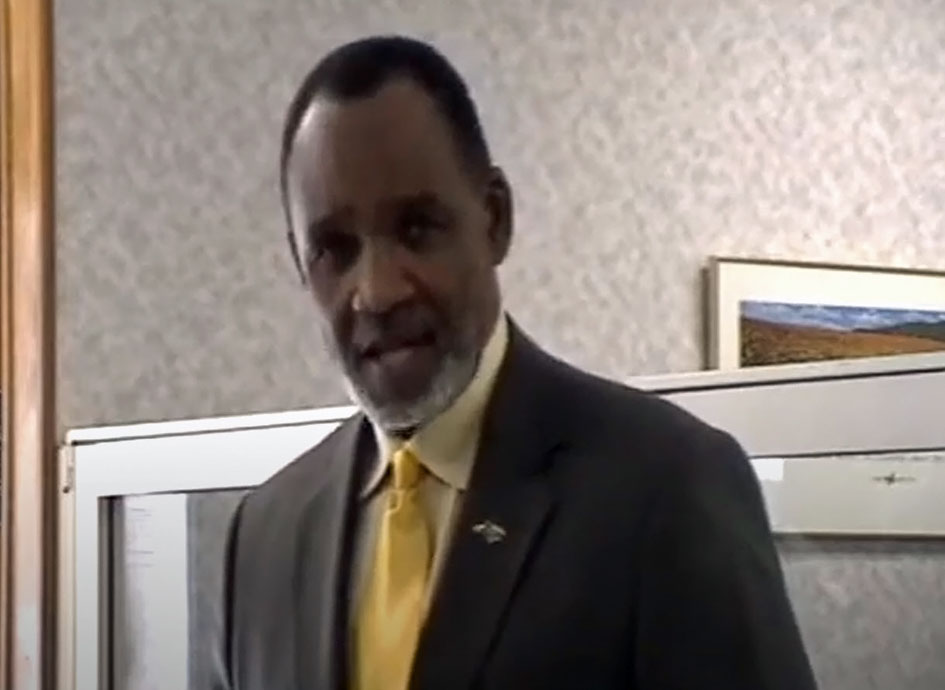 See Mr. Carey in 2009 discussing North Carolina economic conditions during his time as Chair of the NC Employment Security Commission