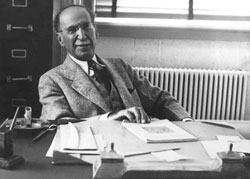 In 1936, the School’s departments and programs were part of the School of Medicine at the University of North Carolina at Chapel Hill. In 1940, the UNC Board of Trustees approved public health as a separate school within the university, and the School awarded its first degrees in 1940.

Through the years, the School has grown into seven departments and one program. The current departments of epidemiology, environmental sciences and engineering, and health policy and management grew from the areas of study that were in place when the School was founded. These included public health administration, sanitation and sanitary engineering, epidemiology, communicable diseases, child hygiene, vital statistics, public health laboratory methods and preventive medicine. (See digitalnc.org.)

In September 2008, the School was named the UNC Gillings School of Global Public Health in recognition of a generous gift from Dennis Gillings and Joan Gillings. Dennis Gillings was a biostatistics professor at the School from 1971 to 1988 and is founder, chairman and chief executive officer of Quintiles. Joan Gillings is a philanthropist and community volunteer. The $50 million donation was, at the time, the largest single gift in the history of the University of North Carolina at Chapel Hill.

For more information, see an exhibit previously on display at the UNC Health Sciences Library of the Gillings School’s history.

Overcoming social and health injustices has been an anchoring focus throughout the history of the Gillings School. Faculty, students and staff continue this tradition of working collaboratively in communities across North Carolina to overcome barriers to good health for all.

“From its earliest days, the School has had a strong moral compass,” said Barbara K. Rimer, DrPH, current dean. “That’s why it was a hospitable place for a group of South African anti-apartheid faculty who emigrated here in the 1960s. That’s why Dan Okun (the late environmental sciences and engineering professor) and other faculty members marched for civil rights in that era. And that’s why a great deal of our research was and is focused on overcoming health disparities.”

Faculty members have been coming and going across the world since the School began. For example, Bernard Greenberg, first a chair of biostatistics and later dean of the School, collaborated with colleagues in Egypt and in other countries, and our biostatisticians for years have trained their counterparts in Chile.

Today, the Gillings School continues to award doctoral, master’s and undergraduate degrees and certificates to students who take courses on campus or via the Internet as distance learners. The School is ranked the top public school of public health (#2 overall) by U.S. News and World Report (ranked in 2022 for the 2023 edition).