Dubé researches ethics of HIV cure-related research, including perceptions of people living with HIV in the US 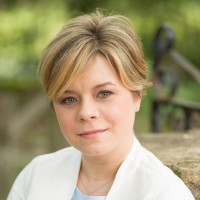 “HIV cure research is unique because it is conducted against a background of highly effective antiretroviral therapy,” said Dubé, research assistant professor of public health leadership in the Gillings School. “In other words, finding cures involves introducing risky interventions with individuals who already are enjoying an almost-normal life expectancy.”

While antiretroviral therapy did contribute to a 48 percent reduction in AIDS-related mortality between 2005 and 2016, the treatment does not remove the virus from a patient’s body. This means the HIV infection retains the potential to spread and intensify within the host, as well as be transmitted to others. In 2008, the full biological cure of Timothy Ray Brown led to renewed global interest in identifying strategies that could lead to an HIV cure.

In her recent work, Dubé addressed HIV cure-related research through two publications with different foci. The first, a research study titled, “If We Build It, Will They Come? Perceptions of HIV Cure‐Related Research by People Living with HIV in Four U.S. Cities – A Qualitative Focus Group Study,” was published online Dec. 5 in the journal AIDS Research and Human Retroviruses.

For this study, Dubé and colleagues conducted 10 focus groups in four United States cities, eliciting the perspectives of people living with HIV regarding the potential of an HIV cure and the processes involved in cure research.

Most participants felt favorable about the concept of a cure that would truly eliminate HIV, and felt it would offer benefits beyond physical relief, including possible de‐stigmatization related to no longer living with HIV, liberation from concerns about transmitting HIV and freedom from the burden of taking daily medication.

However, many participants did not regard a functional cure as a significant improvement over controlling HIV through antiretroviral therapy (ART). (Unlike a complete biological cure, a functional cure would keep HIV durably suppressed in the absence of ART, but would not eliminate the virus from the body.) These participants were anxious about the potential for viral rebound, noting concerns about medical complications and accompanying psychological distress.

Some participants felt the risks of HIV cure research were not worth taking, and many were skeptical about science’s ability to eliminate HIV from the human body.

Having these perspectives on record is extremely important, not least because HIV cure studies will require active participation by people living with HIV. Knowing their desires and perceptions will help recruit study participants effectively and design future interventions that will be well-received by the intended target population.

Dube’s second publication, “Research on HIV cure: Mapping the ethics landscape,” was published online Dec. 8 in PLOS Medicine. In this essay, Dubé and colleagues outline five key stages of HIV cure research and summarize the ethical and implementation issues associated with each stage.

“HIV cure studies occur at various stages of the translational research continuum, from basic scientific discoveries in a laboratory to clinical applications with human participants,” wrote the co-authors. “As the goal of HIV cure research is to identify regimens that are ‘effective, simple, safe, and scalable,’ it will be important to bridge the gap between current basic cure research and the future implementation of cure regimens in clinical practice. In doing so, we must consider ethical issues related to the translation of discoveries from animal models to human participants and future implementation of curative interventions into real-world clinical settings.”

These include the treatment of animal subjects in preclinical HIV cure research, the importance of fully informed consent given the risks associated with human clinical studies, and the need to consider cultural and economic factors when operationalizing the equitable roll-out of a future cure in real-world settings.

By raising awareness of these concerns for HIV cure research developers, regulators and policy makers, Dubé and her colleagues hope to smooth the path to effective, ethical implementation of cure research in the future.

Other PLOS Medicine essay co-authors affiliated with the Gillings School include Asheley Skinner, PhD, adjunct associate professor of health policy and management, and Sandra B. Greene, DrPH, Professor of the Practice of Health Policy in the Department of Health Policy and Management.