In 2014, when residents of Flint, Mich., began to worry about brown water pouring from their taps, Jacqueline MacDonald Gibson, PhD, already was investigating inequities in water quality in North Carolina.

Unlike Flint, N.C.’s Wake County has well-managed municipal water systems, but some African-American neighborhoods completely lack access to the grid. Due to a historic exclusion from municipal water lines, which dates back to the Jim Crow era, these communities have depended upon private wells for drinking water. Because the neighborhoods are within urban areas, surrounded by mostly-white neighborhoods that do have municipal water access, MacDonald Gibson refers to them as “doughnut holes.”

MacDonald Gibson, associate professor of environmental sciences and engineering in UNC’s Gillings School of Global Public Health, was alerted in 2012 by the North Carolina State Health Director that some urban N.C. neighborhoods were without municipal water access. Because Wake County’s data collection systems are advanced, MacDonald Gibson selected that county for a pilot study and began combing through tax records to identify locations of doughnut-hole neighborhoods.

“Many underserved communities are afraid to make themselves known,” she explains. “Often, they also lack access to municipal sewer lines and fear their properties could be condemned if public health officials discover failing or inadequate septic systems in their yards.”

With the neighborhoods identified, MacDonald Gibson determined whether exclusion from municipal water service increased residents’ exposure to water contaminants. (As well users, they are not protected by the federal Safe Drinking Water Act.)

She began to answer that question by analyzing emergency department visits across the state. Her findings showed that individuals relying upon private wells are more likely to visit an emergency room for acute gastrointestinal illness than are individuals from households with public water system connections.

For her latest research, published in November in the American Journal of Public Health, she returned to the underserved communities she had identified in Wake County and surveyed their water quality directly. Laboratory testing revealed that residents in these doughnut-hole neighborhoods are exposed to notably higher quantities of microbial contaminants, including bacteria associated with human fecal waste. Based on these findings, MacDonald Gibson estimates that more than one-fifth of the underserved communities’ 114 annual emergency department visits for acute gastrointestinal illness could be prevented if municipal water service were extended.

“From an infectious disease risk standpoint, these communities would be much better off if they had a connection to municipal water service,” she says. “Ultimately, the important policy question is who should bear the financial cost.”

As MacDonald Gibson continues her quest to reduce inequities in drinking water quality, she plans to follow up in the same neighborhoods to determine whether residents also are being exposed to elevated levels of lead and other metals in their well water.

Meanwhile, she aims to raise public awareness about why some households are offered city water while others are not. 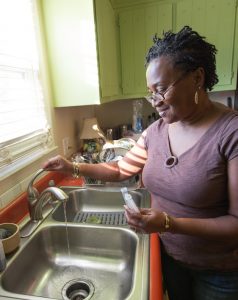 “Racial inequity is certainly at play here,” she says. “Members of these predominantly African-American communities live with a higher risk of drinking contaminated water. In neighborhoods that also have lower incomes, residents are less able to take actions to reduce their risk, such as installing home water treatment systems.”

In 2008, the N.C. General Assembly passed a law requiring testing of all new wells constructed after July of that year. However, the law does not cover wells built before July 1, 2008, nor does it require or provide resources for the continuous monitoring of any well.

MacDonald Gibson’s study results suggest that the lack of support for private well owners to test and maintain their wells will continue to leave underserved communities at increased health risk, compared to adjacent neighborhoods.

As her research has progressed from a theoretical question to the identification of a very real problem, MacDonald Gibson moves toward closing the loop between research and policy change. Ultimately, she hopes that her findings will help achieve one of the charges in the Gillings School’s mission – to eliminate health inequities across North Carolina and around the world.

MacDonald Gibson’s analysis of emergency department visits linked to well-water contaminants was published online in May 2016 by Environmental Health Perspectives. Partial funding for the work on that study was provided by the Robert Wood Johnson Foundation (RWFJ).

Her findings on inequities in municipal water access in Wake County, published online Nov. 17 in the American Journal of Health, were supported by a grant from RWJF and a UNC IBM Junior Faculty Development Award.