Embracing a Culture of Health

Penny Slade-Sawyer, a retired rear admiral in the U.S. Public Health Service, former assistant surgeon general in the U.S. Department of Health and Human Services and former director of the N.C. Division of Public Health, has built a career on promoting and modeling good health practices. She runs, bikes, plays tennis. She has taught aerobics classes and played on a championship basketball team. She walks her dog between two and four miles each day. Only rarely is she standing still.

She joined the staff of the UNC Gillings School of Global Public Health in February 2015, when she was hired to lead a “Culture of Health” initiative at the School, to help encourage those who work, teach or study here to make as many daily healthy choices as possible.

“Risa Lavizzo-Mourey, MD, president and chief executive officer of the Robert Wood Johnson Foundation (RWJF), began using the phrase ‘culture of health’ a while ago,” Slade-Sawyer says. “RWJF began an initiative ‘to encourage individuals, businesses, government and organizations to foster healthy communities and lifestyles,’ and Dr. Lavizzo-Mourey foresaw a vibrant American ‘culture of health’ in which all of us would try a few new things to preserve and improve our health.”

Slade-Sawyer says that Barbara K. Rimer, DrPH, dean and Alumni Distinguished Professor at the Gillings School, responded to RWJF’s challenge, supporting the School community in developing its own culture of health. “In this way,” Slade-Sawyer says, “we’re all able to play a part in developing a healthier America.”

Since her arrival, Slade-Sawyer has taken on a number of initiatives.

She has mapped out – and leads – regular 10-minute walking breaks for people at the Gillings School, guaranteeing that they leave their desks and computers periodically. She has instituted regular yoga classes and mindfulness sessions during the work day and held events at which members of the Gillings School community can sample nutritious snacks and take home the recipes.
.

Engaging in health-promoting activities throughout the life cycle has important long-term benefits.

Richard Smith, PhD, biostatistics professor, has run a marathon annually for the last 35 years. Here, he is shown (l-r) in 1986 in the Ranelagh Harriers run in London; in 1994, at the Boston Marathon; and in 2010, at a Quintiles-sponsored run in Raleigh, N.C.

“The response from faculty and staff members – and students – has been so positive,” Slade-Sawyer says. “Many are already engaged in healthy lifestyles, and they have expressed strong support for our efforts to spread the word about the benefits of exercise.”

Slade-Sawyer notes that a goal should be about 2.5 hours each week of moderately intense aerobic activity, such as brisk walking or tennis.

“Physical activity is essential,” she says, “but a number of elements lead to our having a ‘culture of health.’ Eating nutritious food, learning to handle stress, getting enough sleep – these things profoundly affect our health now and in the future. Poor diet, lack of physical activity and high stress are associated with many of the chronic diseases that kill us.”

Below, see some of the many ways we stay active!
. 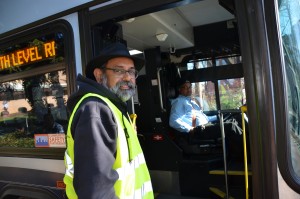 Dr. Kant Bangdiwala, research professor of biostatistics, walks 1.5 miles each day to the bus stop nearest his house, which is outside the city limits, so he can take advantage of Chapel Hill's great transit system (and not have to park on campus). "I'm helping save the environment — and getting my exercise, too," he says. (Photo by Linda Kastleman) 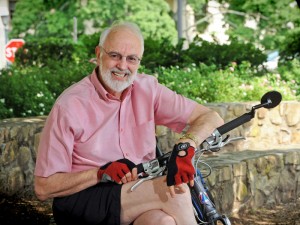 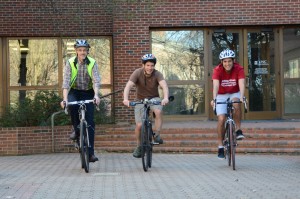 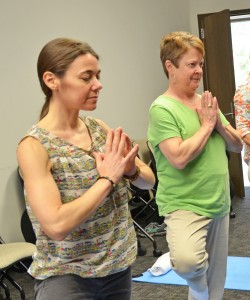 In-school yoga classes initiated by Penny Slade-Sawyer give staff members an opportunity to exercise and meditate during the work day. (Photo by Linda Kastleman) 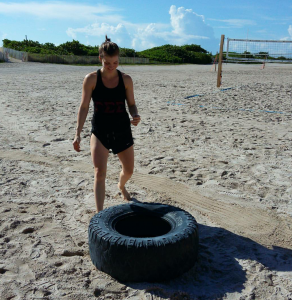 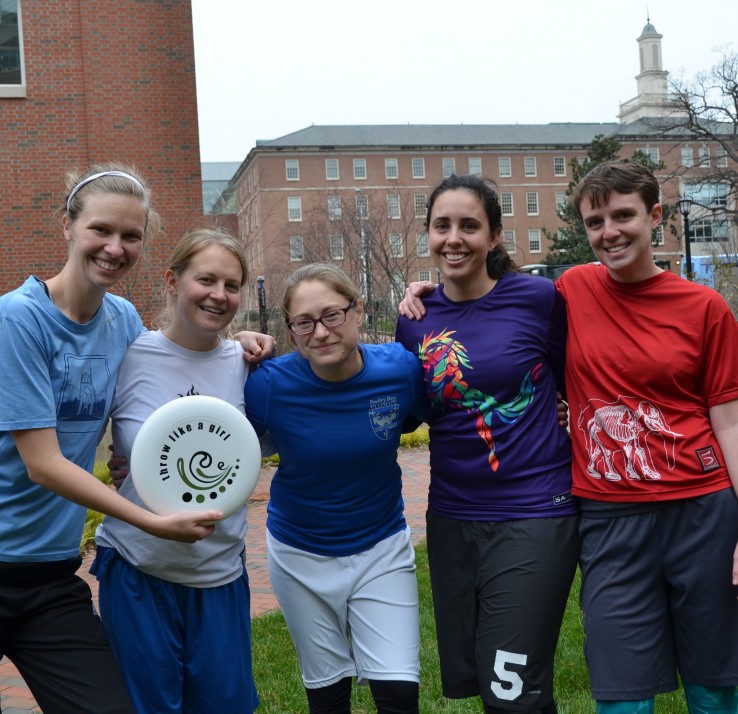 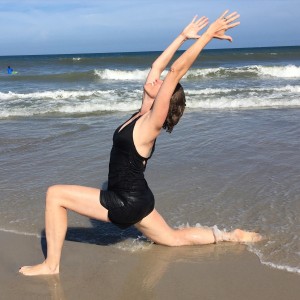 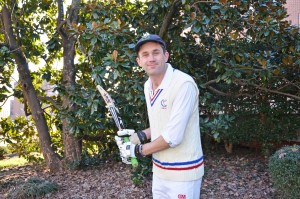 Wake Harper, assistant student services manager in environmental sciences and engineering, began playing cricket as a child in New Zealand. He now plays in a league based in Morrisville, N.C. (Photo by Linda Kastleman) 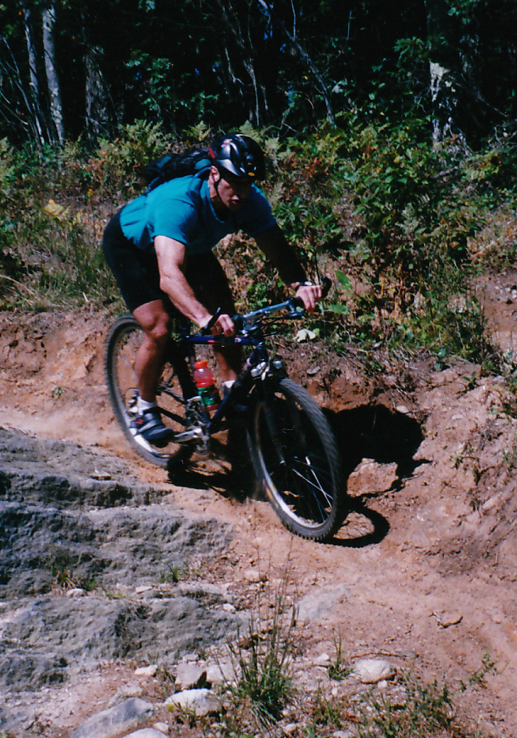 David Pesci, Gillings School communications director, finds that mountain biking calls for intense focus, a skill that transfers to other areas of his life. (Photo by Lisa Williams) 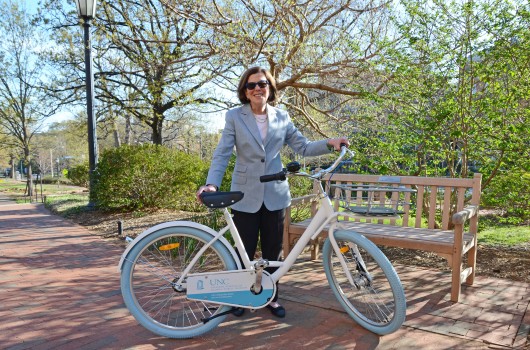 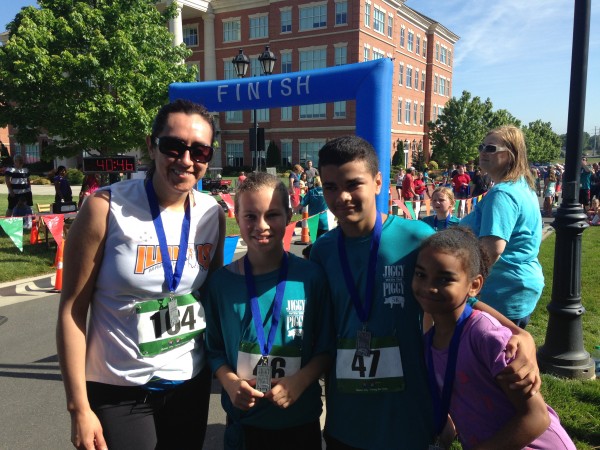 Nutrition Research Institute (NRI) staffers practice what they teach in Kannapolis, N.C. Dr. Itzel Vazquez-Vidal (left), postdoctoral research associate at the NRI, is pictured with her community running club partners after completing a 5K in May 2015. (Contributed photo) 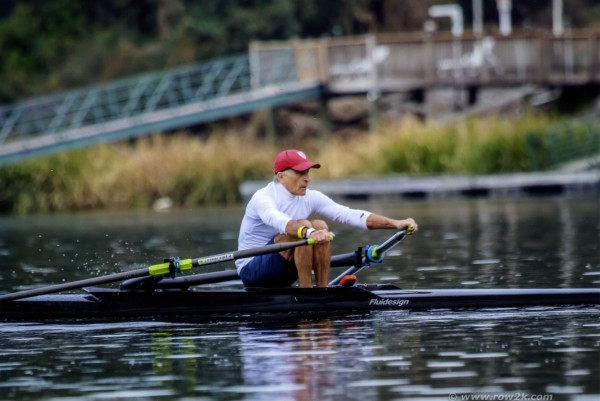