William Ray named as NC’s next director of emergency management 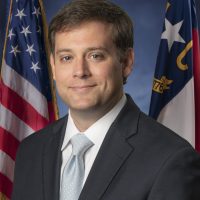 The North Carolina Department of Public Safety announced on July 2 that William Ray, MPH, will serve as North Carolina’s director of emergency management. Ray, who is a graduate of the UNC Gillings School of Global Public Health, will lead the state’s efforts to prepare for, respond to and recover from all hazards and threats, coordinating personnel and resources to support local responses efforts. As part of his role, he will also serve as the State’s deputy homeland security advisor.

“I am extremely grateful Will has accepted this important leadership role for North Carolina,” said Secretary of Public Safety Erik A. Hooks. “Will has been exceptional in his role as Assistant Director and more recently as the Chief of Staff under Director Mike Sprayberry. He has earned the trust of local, state and federal partners to ensure Emergency Management remains a national leader in emergency management services.”

“Will Ray has been an instrumental leader in making sure North Carolina is ready for whatever crisis comes our way,” said Cooper. “I thank Will for this critical service to our state and am confident he will continue to innovate and improve our preparedness and response operations in North Carolina.”

As the NC Division of Emergency Management’s (NCEM) chief of staff, Ray has managed major strategic programs, coordinated among government agencies and implemented complex operational programs, while also serving in a variety of senior leadership roles during major incidents impacting the State, such as the ongoing COVID response.

“We’re pleased that Will has been selected and agreed to lead North Carolina Emergency Management,” said retiring Director Mike Sprayberry. “He’s proven that he’s the right person for the job and he’s earned the respect of the Emergency Management staff both at our agency and, just as importantly, with our county partners.”

Ray earned a Master of Public Health degree from the UNC Gillings Public Health Leadership Program in 2010, and he holds a graduate certificate in Community Preparedness and Disaster Management from the School’s Department of Health Policy and Management. He has also served as assistant director and section chief for the NCEM’s Plans and Homeland Security Section, and his emergency response experience includes local government and private-sector stints as well as a role at the N.C. Department of Health and Human Services.

“It is a privilege to serve alongside the entire Division of Emergency Management team, and I am honored to continue serving the people of North Carolina in this new role,” said Ray. “I am humbled by this opportunity and thankful for the confidence and support of Governor Cooper and Secretary Hooks. The Division will continue to focus on safeguarding all North Carolinians, leveraging the whole-of-government and whole-of-community approach for effective preparedness, response and recovery.