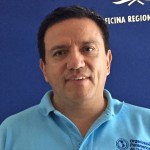 Benjamin Puertas, DrPH, earned a Doctor of Public Health degree from the UNC Gillings School of Global Public Health’s Department of Health Policy and Management in 2015. He enrolled out of a desire to expand his capacity to make a difference, though he had already founded a school of public health and helped many patients as a medical doctor. Now, he’s working with the Pan American Health Organization (PAHO) to train health care workers and ensure the use of best practices in fighting the COVID-19 pandemic.

Puertas made several rotations in gynecology and obstetrics while studying medicine and surgery at the Universidad Central del Ecuador in Quito, but he was soon ready for a new challenge.

“I was beginning to get a bit bored of doing C-sections and hysterectomies,” said Puertas. “It’s really the same thing day after day, so I was looking for something more challenging.”

Because he was also interested in pediatrics, a colleague recommended he learn more about maternal and child health, and he applied to a Master of Public Health (MPH) program at the University of Illinois at Chicago. Working with indigenous communities in Ecuador showed Puertas that public health had a broad potential impact and would allow him to help entire communities, not just individuals.

After earning a Master of Public Health degree, Puertas joined the American Refugee Committee (now Alight) and later Médecins Sans Frontières to work in refugee camps in Mozambique. He initially intended to focus on clinical work, but found that public health interventions had a greater effect on the health of the community. This experience and the tragedy of wartime clinical work convinced him to focus on public health, and he went on to found the Universidad San Francisco de Quito School of Public Health in Ecuador.

His work in Quito brought Puertas in contact with UNC’s Center for Galapagos Studies, and he met several members of the Gillings School faculty there. Additionally, the family that once hosted him as a high school exchange student in Chicago had moved to the Chapel Hill area and encouraged him to study at UNC.

Puertas had already begun working with PAHO in Peru when he was awarded the W. John and Dorothy J. Swartz Expendable Scholarship Fund in Public Health Leadership to enter the DrPH program at the Gillings School. He is now PAHO’s adviser in human resources for 26 countries in the Caribbean region.

He is based in Barbados but was deployed to work on the ground in Grenada when the COVID-19 pandemic hit. By conducting risk assessments and trainings and analyzing capacity, he and the PAHO team were able to increase the safety and efficiency of the response in Granada’s hospitals. Training on personal protective equipment (PPE), in particular, allowed health workers to protect themselves and keep critical isolation facilities clean and operational without fear of contracting COVID-19. Puertas also ensured PPE was reserved for necessary use.

By conducting the World Health Organization’s risk assessment, he helped local health officials determine that it was safe to deploy a group of nurses who had come from Cuba to aid in Grenada’s response, securing much needed help right as the disease was beginning to spread in the country.

“That was really helpful,” said Puertas. “Instead of spending two weeks doing nothing in a quarantine area, they were placed right into where they were needed.”

Now that he’s back in Barbados, he’s looking at the big picture in the Caribbean region. As well as monitoring shortages of health care professionals and ensuring reinforcements reach the areas where they’re needed most, he advocates that national authorities take measures that have proven effective in other countries.

“In Jamaica, for example, they didn’t hire a single doctor,” said Puertas. “They had a group of community health workers who were hired to fight Dengue fever. With PAHO support, they were trained to work in contact tracing, triage and referral of COVID patients.”

When asked about the current disease trajectory, he expresses concern, especially for Haiti but also for other Caribbean countries. Still, he’s largely optimistic.

“The curve has flattened in most of the Caribbean countries,” said Puertas. “So far, all the curfews and the measures taken have been quite successful.”

However, he worries about what will happen when international travel resumes.

“Many countries must put more effort into strengthening their health systems based on primary health care,” he said.

He notes that too many training decisions are made based on profitability rather than the needs of the country. This and migration of health professionals are among issues Puertas plans to discuss at the next CARICOM Chief Medical Officers meeting about challenges and opportunities of universal health coverage in a COVID-19 scenario.

“I think we can use the pandemic to position health issues in a better way than before,” he said. “The world hasn’t seen anything similar to this pandemic — ever. There’s no one on the planet who hasn’t felt, somehow, the pandemic, either in their work or within their family.”

Puertas himself has a 24-year-old son who recently recovered from COVID-19. He is concerned that a new challenge will come after a vaccine is developed.

“You will see drugs being developed, not to be used in Africa or parts of Latin America, but in countries where people can afford them,” he shared. “Those are the challenges, and I see many of them.”

Among the challenges there are also opportunities, he adds, and Puertas plans to keep pursuing those opportunities to help as many people as he can.