Imagine you’re a public health commissioner in Trichy, a major city in the Indian state of Tamil Nadu. Your city has long been lauded as one of the cleanest in the state, particularly on the basis of safe sanitation.

It’s a typical Tuesday, and you’ve been notified that there is a small, 100-cubic-liter raw sewage overflow near a bus stand. There’s also a massive wastewater spill of around 10,000 cubic liters from a properly operated and maintained treatment center. The wastewater is flowing directly into the river and over open farmland in the Cauvery Delta.

Your budget and resources are limited, and you can only address one of these issues at a time. 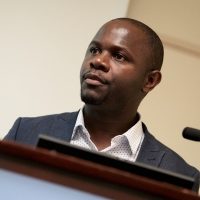 Which do you address first?

“Most people would focus on the treatment center – the larger spill – which is wrong,” said Musa Manga, PhD, a water and environmental engineer and postdoctoral research associate in the UNC Gillings School of Global Public Health.

Manga and a team of researchers from the UNC Water Institute have been conducting fieldwork in Tamil Nadu for more than five years for a study on the unsafe return of human waste to the environment, a project sponsored by the Bill & Melinda Gates Foundation. The team includes Professor Emeritus Pete Kolsky, MEVE ’77, PhD, and Jill Stewart, MS ’98, PhD ’03, Philip Singer Distinguished Professor in the Gillings School’s Department of Environment and Engineering. Their research contributes to UNC’s leadership in the sustainable development goal (SDG) of the United Nations (UN) for water and sanitation.

Poor sanitation is linked to a number of transmitted diseases – including cholera, diarrhea, dysentery, hepatitis A, typhoid and polio – affecting more than 2.2 billion people annually.

The World Health Organization (WHO) and UNICEF provide government officials around the world with standardized guidelines, flow models and approaches to safely manage sanitation services, but these resources are not always straightforward and may not prioritize safety in public health terms. 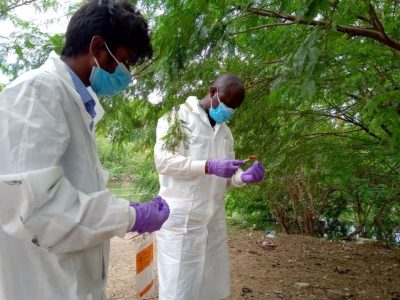 “The most widely used diagram – known as the Shit Flow Diagram – tracks ‘safely managed’ versus ‘not safely managed’ sanitation systems by percentage indicators that are unclear, ambiguous and sometimes misleading,” said Manga, whose 15 years of practical experience as a public health engineer informs his research. “My team and I believe we have an improvement on this diagram that may be a lot closer to the truth, and therefore more useful.”

Manga and his team are tracking a more relevant indicator of potential risk to public health: the number and types of fecal pathogens – bacteria, viruses or other microorganisms that can cause disease – released by different sanitation technologies.

Their findings are upending much of what we thought we knew about safe sanitation practices.

“Engineers widely regard pit latrines as the least advanced sanitation technology, septic tanks as an intermediate level and sewerage as the most modern and desirable,” said Manga. “We found, however, from a public health perspective, that the reverse is true.” 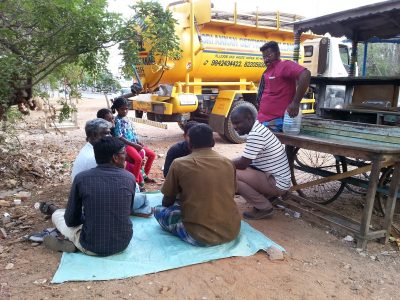 Manga meets with sanitation service providers in Trichy to assess how the community’s sanitation systems are managed.

When sewers overflow – and they overflow frequently for a number of reasons, from clogs to broken pipes to stormwater runoff – they are releasing a higher amount of more active, harmful pathogens into the environment.

Alternatively, Manga explained, pit latrines and holding tanks are safer than any other systems. Partly lined pits and tanks do not have significant overflows, and when human waste is safely contained for an extended storage period, the pathogens die off and pose less of a threat to public health than fresh wastewater from sewers.

Another misperception is that the release of untreated sludge or septage (the solids that settle in a septic tank) is worse than liquid waste. In fact, Manga discovered the potential amount of E. coli. released into the environment due to liquid overflows is about 63 times higher than that associated with sludge. While more disturbingly obvious, the presence of sludge in the environment is nowhere near as hazardous as the daily release of overflows from sewers.

Therefore, Manga determined, sewer leaks and overflows – which are rife with fresh excreta full of living pathogens – should be of much higher priority for public officials than a leak of already well-treated wastewater with no pathogens from an effective wastewater treatment center at the very end of the sanitation chain. The commissioner in Trichy should address the small sewage leak first.

“The front end of the chain is key, the source is always the most important, and it’s where we instruct people to focus in our Community Hazard Flow Model,” Manga added.

The researchers’ ultimate goal is to pitch a new hazard flow model, based on pathogens as hazard indicators, to WHO and UNICEF. But first, Manga and his team need to replicate their fieldwork in other regions.

“We know, in principle, that the context of everything changes per region,” he explained. “The way we use sanitation services in the U.S. is different from the services used in Asia, in Africa in Latin America. The pathogens are different, as well. We want to discover the differences so we can inform policy makers with a wide database of results and insight as to the true performance of waste treatment systems in pathogen reduction.”

Next steps also include examining the resilience of different sanitation technologies to climate change and natural disasters. Emergency situations caused by hurricanes, earthquakes, floods, landslides, fires and droughts all play a role in increasing water and sanitation-related disease.

“How do we properly design these systems to be resilient?” Manga asked.

The Water Institute at UNC provides Manga and his team with access to expertise and lab space around the world for this important work. The support from the Bill & Melinda Gates Foundation has proven critical, as well.

“We’ve had such a great working relationship with the Gates Foundation professional staff, who have been productively engaged with the research and our team from the start,” Manga acknowledged.

All of the work being done at the UNC Water Institute is tied to the UN Sustainable Development Goal 6 (SDG 6): Clean Water and Sanitation. Largely due to the work of the Institute, UNC-Chapel Hill was ranked first in the world for SDG 6 by the 2020 Times Higher Education Impact Rankings.

Kolsky earned a Master of Environmental Engineering degree and Stewart earned both Master of Science and Doctor of Philosophy degrees from the UNC School of Public Health.