In fact, the study found that households in communities of color experience energy poverty at a rate 60% greater than those in white communities. 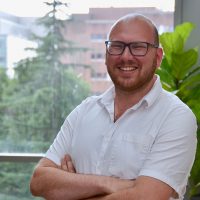 “Old, inefficient buildings and heating systems — an example being the site of the recent Bronx fire — are prompting people to supplement their energy needs with space heaters. These electric space heaters can be expensive to operate in terms of monthly energy costs and typically burden the lowest-income households the most,” said Noah Kittner, PhD, assistant professor in the Department of Environmental Sciences and Engineering at the UNC-Chapel Hill Gillings School of Global Public Health.

The new study from Kittner and his co-author, UNC graduate Eric Scheier, MSc, was published online January 12, 2022, by the journal Nature Communications. In their paper, the researchers share the novel metric they used, based on Net Energy Analysis, which relates the consumption of energy in a household with the total input energy required. This approach revealed significant disparities in U.S. energy spending across race, income, education status and housing tenure.

Moreover, differentiating by fossil fuels and renewable energy sources found even higher energy burdens for households that are more dependent on fossil fuels for heating, including Black, Hispanic, and Native American households.

The authors describe resulting inequitable energy expenditures as a “poverty trap” — a significant challenge to families who struggle to meet monthly bills while living paycheck to paycheck.

Higher incomes drive the escape from energy poverty: Middle- and high-income groups do not spend drastically different amounts on energy (21% and 63% more than the very low-income group, respectively), but earn three and 10 times what the bottom group makes.

“In the short-term, assistance with energy bills — and in the long-term, investments in energy efficiency improvements — could go a long way to closing the equity gap and making safe and clean energy available to a wider group of people,” Kittner said.