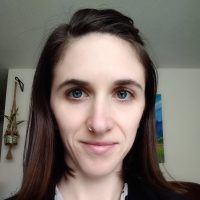 Elizabeth Christenson-Diver, PhD, a postdoctoral research associate at the UNC-Chapel Hill Gillings School of Global Public Health, has been awarded a Science & Technology Policy Fellowship (STPF) from the American Association for the Advancement of Science (AAAS). Her placement is with the United States Department of State’s Bureau of Western Hemisphere Affairs — specifically, the Office of Canadian Affairs. 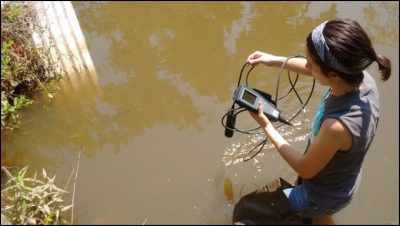 Christenson-Diver earned a Bachelor of Science degree in environmental science at UNC, followed by a doctoral degree from the Gillings School’s Department of Environmental Sciences and Engineering. She returned to support the Water Institute at UNC’s work on global water, sanitation and hygiene (WaSH) security and resilience, surface disinfection in health care and microbial water quality.

Now, she is among 284 highly trained scientists and engineers who will spend a year serving professionally in federal agencies and congressional offices as Science & Technology Policy Fellows. The United States government benefits from the contributions of these experts, while fellows learn first-hand about federal policymaking and implementation.

For nearly half a century, the fellowship program has been in place as part of the AAAS mission to advance science and serve society. The program aims to support evidence-based policymaking by leveraging the knowledge and analytical mindset of science and engineering experts, and to foster leaders for a strong U.S. science and technology enterprise. Fellows represent a full spectrum of disciplines, backgrounds and career stages.

Of the 284 fellows in the 2020-21 class, 30 will serve in Congress, one will serve at the Federal Judicial Center, and 253 will serve 17 different federal agencies and departments in the executive branch.

“Particularly in this age of COVID-19, we are proud and grateful to usher in the 48th class of Science & Technology Policy Fellows in September,” said STPF Director Jennifer Pearl, PhD. “The present state of the world demands a strong link between science and policy.”

Since the program’s inception in 1973, more than 3,400 fellows have supported the executive, judicial and legislative branches of the U.S. government. After the fellowship, many fellows remain in the policy arena, working at the regional, state, federal or international level. Others pursue careers in academia, industry or the nonprofit sector, leveraging their fellowship experiences to enhance their contributions and broaden their reach. 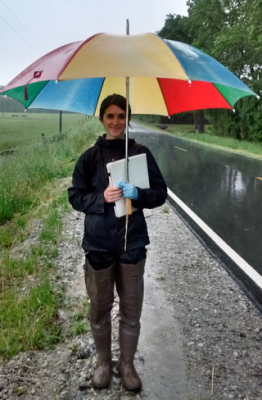 Dr. Christenson-Diver waits out the rain during field work.

“To say that UNC has defined my academic career would be an understatement,” Christenson-Diver shared. “I could regurgitate the knowledge I gained or the skills I learned, the degrees or awards — but what I’ll really remember from UNC after ten years studying environmental science is more personal:  the conversations I’ve had with colleagues and advisers regarding ethical study design; the roles and responsibilities of a university scientist in community-based participatory research; purposeful structures and attitudes to foster collaborative — rather than hierarchical or competitive — research groups.”

“We all stand on the shoulders of someone else,” she added. “I have had the best mentors and advisors at UNC and want to thank them for supporting me: Dr. Greg Gangi, Dr. William Gray, Dr. Jamie Bartram, Dr. Marc Serre, Dr. Jill Stewart, Dr. Aaron Salzberg and the late Dr. Steve Wing. Moving into the federal government, I’m excited to learn how we scientists can do a better job translating our work for policy-makers and how federal agencies incorporate research and analysis into their decision-making.”

The American Association for the Advancement of Science (AAAS) is the world’s largest general scientific society and publisher of the journal Science, as well as Science Translational Medicine; Science Signaling; a digital, open-access journal, Science Advances; Science Immunology; and Science Robotics. AAAS was founded in 1848 and includes more than 250 affiliated societies and academies of science, which serve 10 million individuals. Science has the largest paid circulation of any peer-reviewed general science journal in the world. The nonprofit AAAS is open to all and fulfills its mission to “advance science and serve society” through initiatives in science policy, international programs, science education, public engagement and more.