We at Research, Innovation and Global Solutions, interviewed Harsh Agarwal about his short film Mind Mera Mind, his professional background before Gillings, his work in mental health, and why he chose Gillings. 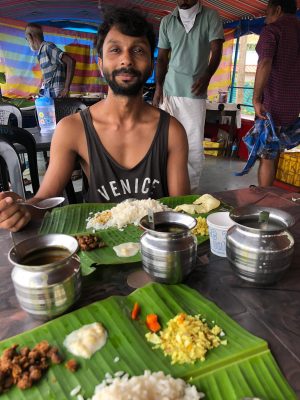 What was your background before enrolling in the MPH program?

I graduated as a Mechanical Engineer and worked in digital marketing for three years. I entered public health when the Elton John AIDS Foundation’s behavioral change program focusing on urban men who have sex with men (MSM) was looking for a digital expert who also understood the Indian MSM community. With that, I transitioned full time to public health and then worked with USAID funded HIV programs with FHI 360 and later with a consortium of John Hopkins University, YRG Care, Blue Lotus Advisory, and others. In 2020, I decided to discontinue my public health work temporarily, apply for universities to get better technical expertise, travel India (with precautions), and connect back to my creative self.

Will you tell us more about your short film Mind Mera Mera?

Mind Mera Mind is a special film for me and had a journey of its own. It was conceived when I was at a coastal city of Vishakhapatnam and elaborated/planned sitting in an apple orchid near the Himalayas in Manali. The film shows the protagonist Prateek – a young gay man who has just started becoming independent going through issues like coming out, self-perception and body image issues, fear of not finding love, pressure to succeed, and how they manifest into Anxiety, Self-Doubt, Loneliness and Depression.

The creative technique to personify isn’t new – however, doing in the context of mental health has been done for the first time. Most importantly, it has local context and hence it connects very well with the target audience. The film works as a social advocacy tool to promote health seeking behavior among young gay and bisexual men in India.

Will you tell us more about your work with mental health?

This is my first work that focuses specifically on mental health. However, I feel, mental health is always a layer that’s present no matter what sort of public health or advocacy work you are doing. Even while doing work on HIV, we used to hire trained counselors to help patients deal with stigma and most importantly for those who newly tested positive. Our team had counselled many individuals and also successfully prevented suicides.

What does “global health” mean to you?

There is so much discussion on this. But the few keywords I feel that I have started to relate with global health would be ‘synergetic’, ‘selfless’, and ‘for all’. I think I am still on my journey to learn and unlearn what global health means for me.

What drew you to the Gillings School of Global Public Health?

The Gillings website was simple and straight-forward and it told me what I needed to know. The academics here had impressive and inspiring careers and it was a two-year course including a practicum – which made more sense for me since I didn’t study public health before. And of course, the prestige of UNC Chapel Hill.

What is your dream job?

My dream job would be doing something that creates sustainable action leading to tangible positive change in lives of vulnerable and stigmatized populations like that of myself. I know it sounds vague but I prefer to remain open and tie myself to a goal rather than a job.

When You’re Having A Bad Day, What Do You Do To Make Yourself Feel Better?

I put on some music and cook. I feel cooking itself is a creative and calming process.