Dr. Diane Calleson and her husband Jerry pause at the end of a 70-mile trek in the Scottish Highlands. The city of Edinburgh is in the background.

I am one of the fortunate UNC faculty members who was swept up in the now-national effort to create policy changes that led to the acceptance of community-engaged scholarship as a viable and valid form of academic pursuit.

With my colleagues, I challenged institutions to change their promotion guidelines so that community-engaged work received the respect it deserved. I was part of the team, with more senior faculty like Sarena Seifer, MD (research associate professor, University of Washington at Seattle), that published “The Scholarship of Community Engagement: Is Faculty Work in Communities A True Academic Enterprise?” in Academic Medicine (2005).

We also created a promotion toolkit for Community Campus Partnerships for Health. Because of my involvement in this policy effort, I knew a lot more about the promotion process than most assistant professors, which helped me feel ready to begin applying to become an associate professor when my time came.

But in the summer of 2006, when I should have been engaging in the promotion process, it had lost its importance to me. I had been diagnosed with a potentially life-threatening illness, ovarian cancer, which required two surgeries and twelve months of chemotherapy treatment. The prospect of detailing my career story in the form of a promotion portfolio seemed like a strange activity in that now-remote world called academia, a world to which I wasn’t sure I would ever fully return.

Instead of a life focused on the academic calendar, I was now seeking life itself in an uncertain and completely new terrain. While I was often afraid of the unknown, I began to learn that the way to get through the day was to focus on what was right in front of me. The only place I could find solace, joy, and sometimes the surprise of laughter, was in the day I was living. 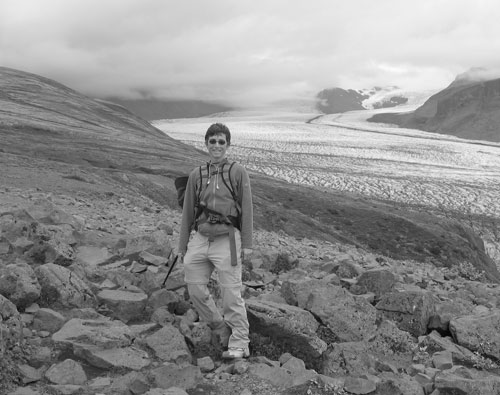 Calleson hiked in Iceland in 2007.

Well over a year into this process of what I call “Grace and Medicine 501” (I still use “teacher talk,” even in a crisis!), my doctor recommended a holiday from treatment. He had sensed that something unusual was happening, and he was right. My condition didn’t get worse. In fact, I felt even better than I had before the diagnosis!

In focusing on the present and on the healing process, I was offered grace, and I accepted it. And while I still have a little bit of this “problem” called cancer, I’m living well with a rare and stable form of the disease, without any medical treatment. It is a medical miracle.

I told one of my doctors, who is also a faculty colleague, that this new terrain was, in some odd way, a sabbatical in which I was learning to experience life in new ways.

My well-trained analytical brain needed a break. I discovered that my right brain just wasn’t very helpful to me in this new world. My left brain, intuitive and creative, was glad to be there to help me move to a place where I could become part of my own healing process.

I began to practice complementary therapies including qigong, yoga, meditation, a new diet, and drawing big, life-sized pictures with Cray-pas, an oil-based crayon which I can rub, using my tactile sense to create meaning and foster healing. I became motivated to do what felt good. I was now open to developing these practices as part of my protocol of self-healing.

I began to walk the trauma out of my body with long-distance hikes – here in North Carolina and on 70-mile treks in mystical places like the highlands of Scotland, Iceland and Croatia.

I was changing through this process. As one physician colleague said to me, “Your openness may be the very thing that altered the homeostatic balance and changed the course of the disease.” The illness was no longer dealing with the same person it had started with. I liked this hypothesis — it worked for me. No hypothesis-testing needed.

Then I returned to academic life — slowly, in phases. First, I came back to the classroom. I had not realized how much I missed my students until they came to talk with me about their papers and their hopes and plans for making the world a better place. I was beginning to remember what had drawn me to teach — it was the mentoring and fostering of students’ growth and vision. Sometimes I would come home with tears in my eyes because I was happy to be back. Okay, I was overjoyed, thrilled to have returned to the academic world that had seemed so distant for so long.

The next phase of re-entering academic life meant engaging in an annual goal-setting process. In writing down my goals, I opened up Pandora’s Box when I jotted down the question, “Should I consider creating my promotion portfolio?”

When I met with my mentor, Jan Dodds, EdD, I let her know that I wasn’t sure if I was ready to set this promotion process in motion. Doing so would mean committing to a task, a project that was longer than the four-month intervals within which I currently lived my life. (As a cancer patient, I return to the doctor every four months for a checkup.) I had learned to live each day with a reborn energy, but planning my life beyond the next four-month checkup might, perhaps, tempt fate. Or, maybe committing to a career goal was a sign that I was healing, allowing myself to move forward in time.

During my meetings with Jan, she simply listened, and this enabled me to move slowly but surely to the place where I was ready to dig in and give it a try. But what would it mean to create this promotion portfolio? I no longer had a need to prove myself. This is one of the upsides of an illness. Much of one’s ego falls by the wayside.

For me, this process would be what it had been intended to be all along — a way to reflect on what I had done and how I wanted to move forward as a faculty member, one whose life had been transformed by this illness, such that the pre- and post-Diane would now be hard to measure in any quantifiable way. It took me a year to write the career and teaching statement, put together an incredibly detailed teaching portfolio, the curriculum vitae, the external and internal review letters and publications … academics, you know the drill. Yet this process yielded its lessons, its teachable moments — and I was listening.

When the process became too evaluative, I took care of myself with long walks and yoga. Sometimes a good massage relieved the stressors of this process! If I could add a lesson to the toolkit for community-engaged scholarship, it would be that we need to take care of ourselves with the same commitment, passion and care that we give to the work of improving community health. It’s that simple.

In writing the career and teaching statement, I came to see that I had developed a new feeling of loyalty and admiration for the University of North Carolina. Through teaching I had found a way to give of myself — and in return, I received more from the students than they would ever know. I had worked on numerous projects and grants with peer and senior faculty who mentored me as we gave our best to improving the health of the public. I came to see that I wanted to stay here at UNC.

But I also learned that the work of academia needed to be consistently meaningful, not busy work. Too often I had jumped into a project with excitement, but without a clear sense of purpose or passion. In one short reflective piece, I wrote this on my large sketch pad shortly after my portfolio package had been turned in to the School…

It moves at an ungrounded pace that leaves you panting, oxygen depleted. It does not match the natural rhythm of your inner core.

Slow the pace. Find your rhythm and fluid movement. What brings you passion, and where does it come from? Insights here can stem the tide of busyness.

Monks do not live busy lives — at least this is how it seems from my non-monk’s view. Their tasks are gentle and simple, yet they flow into wholeness. Reading, prayer, cleaning, cooking, planting gardens, serving others — all fit together in a community where work is living and living is not busy work. I have a monk-like spirit, I suppose, so that I now watch and listen and consciously create a life where work is playful and paced so that I can absorb and allow meaning to grow into me.

This last week had its too familiar and frequent request to engage in the work of busyness. To do this means to forsake, give in to a former life of an over-committed self. I feel resistance — it’s moving too fast and I can not keep up! I will not. It’s not easy to say “no” when everyone else is saying “yes.” Too much is at stake to go down this path of busy work. I need to move with a steady gait where I can learn and engage in the work of life. There is a quietness and ease in this place we call home within ourselves.

Postscript: What was the promotion outcome? I received a 7-0 vote of assent from the Academic Promotions Committee and, admittedly, this recognition felt good. I guess there is still some ego left in my academic soul. As time passes, the transition to clinical associate professor is also giving me a greater sense of what I have to offer and what UNC has given me – a place to engage in the meaningful work of teaching, mentoring, and creating healing spaces for others to see that life is worth digging deep for, whether it is for oneself or for an entire community’s wholeness. For me, this is what public health is all about.