Living the ‘local is global’ ethic

.
Dr. Jim Herrington’s distinguished career in public health began with a game of Spin the Bottle. During his tenure in the Peace Corps, Herrington was invited to travel to a remote outpost of southern Senegal. Along with colleagues from the U.S. Agency for International Development, UNICEF and Senegal’s Ministry of Health, he paddled in a dugout canoe through the densely forested territory of Casamance. At each village, they randomly surveyed households to gauge children’s immunization status. The team members always carried a bottle.

“You take a bottle and set it in the central part of the village,” says Herrington. “You spin it and go in the direction that it stops.”

By using the Expanded Programme on Immunisation (EPI) “100 Household Random Sample Survey Method,” they were able to estimate accurately the extent of coverage for childhood vaccines in the region.

“I just found it fascinating to be out in the field conducting these surveillance programs,” says Herrington. “That was the first sense I had as to what it might be like to be in public health.”

The Peace Corps was a surprising choice for Herrington, given his roots. Reared in a blue-collar home, he was the first in his family to go to college. He had never been outside the U.S., much less to sub-Saharan Africa. “I was in uncharted territory,” Herrington says.

It wasn’t long before he felt at home in the wide world. Soon after the Peace Corps, Herrington earned a Master of Public Health degree in health behavior from the Gillings School, and later earned a doctorate in epidemiology, with an environmental focus, from Colorado State University. For many years, he served as a health scientist for the Centers for Disease Control and Prevention and, most recently, he was director of international relations for the National Institutes of Health’s Fogarty International Center.

In 2014, Herrington’s journey came full circle. He returned to UNC’s Gillings School of Global Public Health to take a job as the first executive director of the Gillings Global GatewayTM. Developing the Gateway had been the strongest recommendation made by a SPH2020 committee that focused on the School’s global activities.

Since taking the new position, he has begun what he calls his “Metallica listening tour” to better understand how to help students and faculty members succeed.

“I call it that because I want to hear what people have to say, and I want to hear it loud,” Herrington says. “My goal is to meet students and faculty members where they are, discover what they’re interested in, and facilitate connections with external partners and resources.” An avid pilot, Dr. Herrington (left) prepares for a flight with his son Ben. (Contributed photo)

In addition to his work supporting students and the faculty, Herrington continues to pursue his own research. He has published articles on how our perceptions of susceptibility to disease drive health practices (such as the decision to vaccinate). He is also something of an entrepreneur, collaborating with colleagues on the development of a handheld medical device that can decipher real versus counterfeit medicines.

Herrington has worked in more than 35 countries around the world, but at this stage in his life, his greatest rewards come from mentoring the next generation of public health professionals.

“We have a real niche opportunity at the Gillings School to become the go-to place for global public health,” Herrington says. “Why? Because of the student talent we attract and the cutting-edge science conducted by our many researchers who collaborate around the globe. I’m very excited to be a part of it.”

The Expanded Programme on Immunisation (EPI) ‘100 Household Survey Method’ to which Herrington refers is described on the page numbered ‘17’ of a World Health Organization document found at tinyurl.com/WHO-Epi-survey.

Herrington’s goals for the gateway Gillings School digital globe
The digital globe will show a distribution of all UNC public health research activities — past and present — both on campus and throughout the world. Searchable by keywords, it will include links to principal investigators and their projects, abstracts and other resources to facilitate connections and collaboration among researchers.

Gillings School tar heel student practica database
The Gateway will host an online archive of all past practica and share potential resources for current or future opportunities, to help students gain real-world experience. 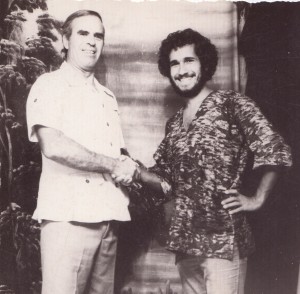 A Native American of the Chickasaw tribe, Herrington holds a Bachelor of Science degree in psychology from Texas A&M University, a Master of Public Health degree in health behavior from the Gillings School (1983) and a doctorate in environmental health and epidemiology from Colorado State University. Like his brother, he is a pilot and enjoys flying. Read more about him at sph.unc.edu/Herrington-QA.

Although Herrington was the first in his family to go to college, he wasn’t the last. His younger brother, John B. Herrington, PhD, earned a master’s degree in aeronautical engineering, applied to NASA, and became the first Native American astronaut. John Herrington is scheduled to deliver the spring 2015 Gillings School of Global Public Health commencement address. Read more about him in “Up, up and away!”