The National Intelligence Council (NIC) officials, who asked that their names not be published given the sensitivity of their intelligence work, used all of those skills recently to author and publish a policy document detailing the effects of climate change on national security.

Their 27-page National Intelligence Estimate (NIE), entitled “Climate Change and International Responses Increasing Challenges to U.S. National Security through 2040,” outlines and rates challenges to U.S. security interests over the next two decades, as the planet’s average temperature increases. Having been approved by 18 U.S. intelligence agencies, it represents the U.S. intelligence community’s most coordinated written assessment of the issue. 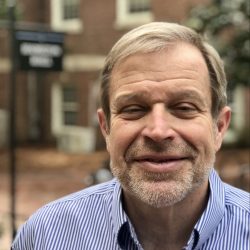 As part of their visit, the authors met with three Carolina classes, including a first-year seminar (POLI 89) on the global politics of climate change taught by Robert Jenkins, PhD, teaching professor in the political science department.

“In class, the authors were engaging and several times offered to help students who were thinking about a career in the intelligence community,” Jenkins said. “Students appreciate their accessibility and openness to interaction.”

According to Jenkins, they touched on many themes expected to be on display during the annual United Nations climate conference, known as COP 27, in November.

“When we hear about climate change, it’s this crazy big catastrophe,” Deshpande said. “How can one person stop the polar ice caps from melting? But to sit in the same room as people who have actually researched and are coming up with solutions for it was incredible. It brought the issue closer to me and made it seem like I can also help contribute to solutions.”

The NIE’s findings are considered to be extremely authoritative, said Aaron Salzberg, PhD, director of the UNC Water Institute and Don and Jennifer Holzworth Distinguished Professor in environmental sciences and engineering at the UNC Gillings School of Global Public Health. Salzberg was a panelist alongside the NIE authors in a discussion for students and faculty moderated by Barbara Stephenson, PhD, vice provost for global affairs and former U.S. ambassador. 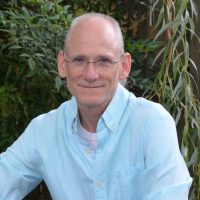 “Not only does it help inform what the United States intelligence community might do, but it also informs what the broader United States government might do, as well as other governments across the world,” Salzberg said. “These types of products can be incredibly important in shaping the discussion and also the specific directions that governments and non-governmental organizations (NGOs), international institutions, and other organizations might take to respond to very pressing global and national security issues.”

The visit also allowed a small group of UNC-Chapel Hill faculty to meet with the authors and share their insights on emerging trends and risks, which will inform the NIC’s next Global Trends report. The report assesses the key trends and uncertainties that will shape the strategic environment for the U.S. over the next two decades. Policymakers use the report as an analytical framework as they craft national security strategy and navigate an uncertain future, according to the NIC. 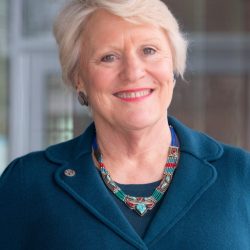 “With this chance to shape the next Global Trends report from the Office of the Director of National Intelligence, Carolina is further establishing itself as a thought leader on global issues,” said Stephenson. “And the Diplomacy Initiative is helping to ensure our students add access to foreign affairs practitioners to the top-notch education they’re getting at UNC.”

The Diplomacy Initiative, launched in 2021 by the Office of the Vice Provost for Global Affairs, creates opportunities for Carolina students to master career skills like researching and writing policy briefs—and to engage directly with foreign affairs practitioners like the NIE authors.