On August 22, assistant professor Alexandra Lightfoot, EdD, graduated. Instead of gaining another degree, however, she was honored for completing the 2016-2018 Thorp Faculty Engaged Scholars program at the University of North Carolina at Chapel Hill.

Lightfoot, who teaches in the health behavior department at the UNC Gillings School of Global Public Health, is the first Thorp Scholar to represent public health in the program. She joined eight other UNC faculty members – from fields as diverse as anthropology, government and pediatric dentistry – who graduated as the latest cohort in the Carolina Center for Public Service (CCPS) initiative.

The CCPS created the Faculty Engaged Scholars program in 2007 to advance faculty involvement in engaged scholarship – in other words, research that involves and benefits other communities. In 2013, an endowment honoring UNC’s former chancellor H. Holden Thorp was established to support faculty in the program. Since the initiative began, 63 faculty members have been selected from 12 professional schools and the College of Arts and Sciences, representing more than 28 departments.

Over the past two years, Lightfoot and her colleagues have delved into an experiential, competency-based curriculum designed to advance their engaged scholarship. Throughout the program, they participated in interdisciplinary, collaborative sessions to learn from other Carolina faculty and their community partners. While gaining new skills and becoming integrated into a supportive learning community, each Thorp Scholar also developed an individual project.

In her day-to-day work, Lightfoot uses a community-based participatory research approach to address racial and ethnic health disparities with communities across North Carolina. As a Thorp Faculty Engaged Scholar, she worked on three related initiatives.

First, she enhanced her engaged teaching, incorporating participatory photography to facilitate explorations of racial identity with her public health students and thereby help them develop an equity lens to bring to their work as practitioners. Second, she expanded her independent research, forming a collaboration with investigators and community partners in Western North Carolina to adapt an adolescent sexual health intervention for public schools in a new context. Finally, she developed a new global partnership focusing on barriers to girls’ education in rural Nepal. Working with a Nepalese colleague, she is launching a participatory research program to engage rural girls and their families, gain better understanding of the barriers to girls’ education through their eyes and identify strategies with them to increase school retention. 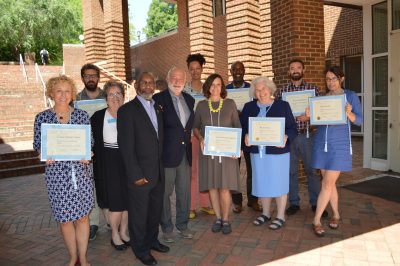 The 2016-2018 cohort of Thorp Engaged Faculty Scholars smiles together following their graduation ceremony. (Dr. Lightfoot is wearing a yellow necklace.)

“This is a great program that really helps UNC faculty deepen our skills in engaged scholarship,” Lightfoot said of her experience. “It’s empowered me to build a meaningful network across the campus and broader communities.”

Now, Lightfoot and her fellow graduates have joined a growing network that already has led to new interdisciplinary collaborations, successful grant applications and both traditional and innovative products of scholarship.

This article is based off an earlier version posted by the Carolina Center for Public Service.