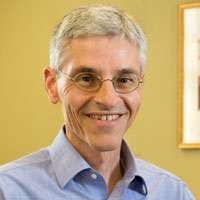 Michael (Mike) Demilt Aitken, PhD, age 64, professor emeritus in the Department of Environmental Sciences and Engineering (ESE) at the UNC Gillings School of Global Public Health, passed away September 19 after a long, courageous battle with cancer. His family was beside him in his Chapel Hill home.

“Mike was a highly respected, very accomplished, deeply valued and cherished member of the Gillings community,” said Barbara K. Rimer, DrPH, dean of the Gillings School. “He had colleagues and collaborators from around the world, and many traveled to celebrate him and his contributions at a retirement symposium held in November 2019. He was an impressive leader, scientist, mentor, teacher, advocate and ambassador. He was an exemplar for evidence, strong science, excellent teaching, decency, integrity, inclusion and ethical behavior.”

From 1988 to 2019, he taught and conducted research in wastewater treatment and the bioremediation of contaminated soil at the Gillings School. In addition to serving as chair of the ESE department from 2006 to 2016, Aitken was a member of numerous professional societies and received a variety of awards and honors, including his election as a fellow of the Association of Environmental Engineering and Science Professors in 2018 — a singular distinction bestowed on the best practitioners in the field.

During his time as chair, Aitken led many significant evolutions in the department. Among his most long-lasting contributions were his efforts to increase ESE’s diversity. He encouraged many kinds of strong science in the department, from basic lab science to methods and applied work, including with communities. Under Aitken’s leadership, the Gillings School launched the UNC Water Institute, which continues to thrive. 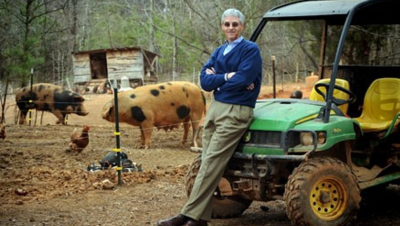 “Mike was a central force in the department and School,” Rimer shared. “In 2007, he was part of a successful effort that resulted in the department receiving a large contract with the United Arab Emirates’ environmental agency, and we traveled to the UAE on several occasions to meet with their teams. He was a great travel partner for those of us who made the long trips to Abu Dhabi. His warm personality and wit were great stress reducers.”

As an engineer and researcher, Aitken was an innovator. He received a 2009 Gillings Innovation Laboratory award (PDF) to study the feasibility of a new method to remediate hog waste, partnering with a farmer in Harnett County, North Carolina. He was careful, as always, in his use of resources, and bought a used circus trailer to serve as the farm-based research lab. Aitken also was one of the leaders for ESE’s important Superfund projects, which are supported by the National Institute of Environmental Health Sciences.

“Mike was a notably decent, caring, humble, and humane person and chair,” said Rimer. “He treated everyone with respect and civility and was committed to mentoring the faculty he recruited here — along with his students. It was never about him, and he understood the need for compromise. Mike practiced what he taught — riding his bicycle between Gillings and Carrboro, even bravely getting back on the bike after an accident that could have killed him. He was devoted to his family and was an avid gardener — I remember many happy conversations about native plants. The Gillings family, and the environmental community, near and far, have lost a dear faculty member, friend, colleague and mentor. We shall miss him.” 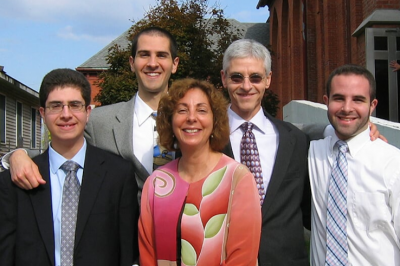 Dr. Michael Aitken (in sunglasses) smiles with his wife and three sons.

Aitken is survived by his devoted wife, Betsy Bea Rudolph; his sons, Matthew Lawrence (Dana Clifton), Myles Emmet (Jessie Schrubbe) and Graham Robert; his granddaughter, Madeleine Clifton Aitken; his siblings, Elizabeth (Stephen) Fleury, Peter (Patricia) Aitken, John (Mary Beth) Aitken and Nancy (Philip) Foisy; as well as a dozen nieces and nephews. He is preceded in death by both of his parents.

In lieu of flowers, those who wish may consider donating to the North Carolina Botanical Garden, the V Foundation for Cancer Research or Water.org, as well as planting a native plant species in Aitken’s memory.

A private celebration of life and burial was held at Carolina Memorial Sanctuary in Mills River, North Carolina, on September 23. Once the coronavirus pandemic has subsided and large groups can safely gather in person, a public memorial will be held at the University of North Carolina at Chapel Hill.