The results of a new study show that a theater-based comprehensive sexual health intervention was effective at enhancing HIV awareness among high school students in both North Carolina and California.

The intervention, called AMP! (Arts-based, Multiple component, Peer-education), was developed in 2010 as an arts education tool, and has since been redesigned to incorporate best practices outlined by the Centers for Disease Control and Prevention for school-based sex education. Tamara Taggart, PhD, the lead study author and a 2016 graduate of the Department of Health Behavior at the UNC Gillings School of Global Public Health, wanted to analyze the effectiveness of the intervention at increasing three key elements of HIV prevention: HIV knowledge, awareness and attitudes.

“AMP! delivers sexual health messages in a fun, interactive and meaningful way that appeals to how adolescents learn and communicate,” Taggart shared. “Our findings underscore the need to design sexual health interventions that are developmentally and culturally appropriate for adolescents.”

The full article on the study, titled “AMP!: A Cross-site Analysis of the Effects of a Theater-based Intervention on Adolescent Awareness, Attitudes, and Knowledge about HIV,” was published online April 8 by Springer. Alexandra Lightfoot, EdD, research assistant professor of health behavior at the Gillings School and director of the Community Engagement, Partnerships and Technical Assistance Core at the UNC Center for Health Promotion and Disease Prevention, also was Principal Investigator of the N.C.-based study and a co-author of the article.

The first is a live performance developed and delivered by college undergraduates, who take a university course that trains them in interactive theater techniques and sexual health education. The second component is an interactive workshop for high school students to practice relationship negotiation skills, and the third part is a classroom visit and discussion with an HIV-positive person.

To track the effectiveness of this approach to HIV prevention, the researchers used pre-and post-tests in a control-group study of ninth-grade health students in both an urban California county and a suburban North Carolina county.

In each county, the control group received standard health education curricula delivered by teachers, while the intervention group (located at a different high school) participated in three 60- to 90-minute AMP! sessions in addition to the standard curricula.

Of the students who completed the post-test (159 students in California and 317 in North Carolina), 46 percent were male, 49 percent were white, 90 percent self-identified as heterosexual and 32 percent received free or reduced school lunch.

Test analysis revealed that – while HIV knowledge, awareness, and attitudes improved for both the control and intervention groups in both states – post-test scores were much higher for students who had participated in AMP!. 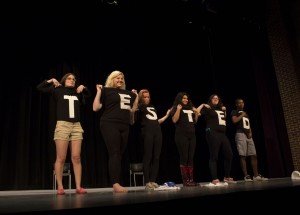 “My involvement with the Sex-Ed Squad (UNC’s AMP! group) as an undergraduate really illustrated the value of using interactive theater techniques to talk about difficult and sensitive topics,” said Niranjani Radhakrishnan, now a graduate student of health behavior at UNC Gillings.

“Students feel much less awkward when we transform talking about sex into something fun. It removes that barrier of discomfort and allows us to have very real and open dialogues. It also offers a safe place for students to make mistakes and try out conversations before they encounter similar situations in the real world.”

As the study showed, the theater-based approach holds potential for addressing multiple adolescent risk factors and attitudes concerning HIV. This kind of intervention is especially important for high school student populations, because adolescence often is associated with a marked increase in sexual experimentation and other high-risk health behaviors.

“The findings from this study are very promising and we are looking to build on them to scale up this creative and memorable approach to HIV prevention,” said Lightfoot. “We would like to bring AMP! to more high school students and school districts in North Carolina.”