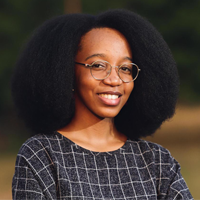 Takhona Hlatshwako, a Carolina senior from the Kingdom of Eswatini in Southern Africa (formerly Swaziland), has been named a Rhodes Scholar to pursue a fully-funded postgraduate degree at the University of Oxford beginning next fall.

Hlatshwako is the 52nd Rhodes Scholar from the University of North Carolina at Chapel Hill and the 33rd Morehead-Cain Scholar to receive the award.

She plans to pursue a master’s in international health and tropical medicine through the Oxford Centre for Tropical Medicine and Global Health within the Nuffield Department of Medicine. The course is a one-year interdisciplinary program that examines major health challenges of populations in low- and middle-income countries.

Hlatshwako’s interest in public health stemmed from a childhood during which she witnessed the devastation that HIV wrought within her home country. The epidemic was “always in the air, was always being talked about,” the Morehead-Cain Scholar said.

“It just became a normal part of life, and that really bothered me, because that should never be something that we get used to,” said Hlatshwako, who is studying health policy and management at the UNC Gillings School of Global Public Health. “I think I always had this thing in me…to go into health or health sciences.”

After completing her high school education abroad at the United World College Dilijan in Dilijan, Armenia, she set her sights on applying to a university in the United States. She was awarded the Morehead-Cain Scholarship in 2018 to attend Carolina, where she was able to combine the “intercultural experience of UNC with the intellectual vibrancy of the Morehead-Cain community,” she said.

Hlatshwako is among the first from Eswatini to receive the Rhodes Scholarship, and she was selected through the Botswana, Lesotho, Malawi, Namibia and Eswatini Scholarship under the Rhodes Trust. While the distinction carries the weight of responsibility, advancing her education and potential as a researcher at the University of Oxford is an opportunity to give back to her country, she said.

“I think it’s important for us to be represented in such a global community…and to have our voices heard,” said Hlatshwako. “I’m humbled that I get to be the one to do that.”

As a rising sophomore, she returned to Eswatini over the summer to work on a United States Agency for International Development (USAID)-funded research project with Sharon Weir of the Carolina Population Center and Joseph Tucker, MD, PhD, of the UNC School of Medicine. Hlatshwako collaborated with a team of researchers to publish a paper on strategies that might increase HIV testing participation and use of HIV-related services among men.

“That project was really informative in my research journey because doing that gave me the confidence to seek out other research experiences,” she said.

Hlatshwako said experiencing the COVID-19 pandemic galvanized her to expand her interests in public health to a global context. During the height of the public health crisis in 2020, she collaborated with University researchers through the Carolina Collective Initiative to amplify community voices in the search for the most effective, safe and equitable ways to serve the campus population.

She has also worked on a global COVID-19 study through the UNC Institute for Global Health and Infectious Diseases and is the co-chair of the Gillings School’s Minority Health Conference, the largest and longest-running student-led health conference in the country.

Following her completion of the program at the University of Oxford, she hopes to continue her graduate education for a second year through the master’s in modeling for global health program. Her goal is to earn a doctoral degree to become a global health scientist and to conduct research in global health, health equity and infectious diseases, she said.

“I think my time at Oxford will be an unequaled opportunity to prepare me to do that,” she said.

The Rhodes Scholarship, established in 1902, is one of the oldest and most prestigious international scholarship programs. Scholars are selected based on academic excellence, character, leadership and commitment to service.