Results from a recent study suggest that human and bat caliciviruses may have evolutionarily descended from a common ancestor, indicating a potential for the bat viruses to cross species barriers and infect humans.

The full article on this study, which was co-authored by several researchers in the UNC Gillings School of Global Public Health, is titled “Bat caliciviruses and human norovirus are antigenically similar and have overlapping histo-blood group antigen binding profiles.” The article was published online May 22 by the journal mBio.

Bats have been identified as key hosts for several emerging and zoonotic diseases, including Ebola virus and SARS and MERS coronaviruses. For this reason, viruses being harbored within global bat populations have been a key focus of recent research efforts. Previous studies have focused primarily on the identification and classification of viral sequences, however, and minimal work has been done to evaluate the biological risks posed by these viruses prior to their emergence in humans. 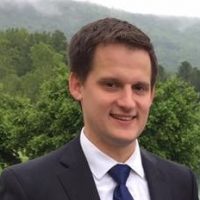 “Our study addresses this question for two bat caliciviruses. Caliciviruses are the viral family that contains norovirus, commonly known as the ‘cruise ship’ virus,” said Jacob Kocher, PhD, a postdoctoral research assistant in the Gillings School’s Baric Lab and first author of the study. “We generated particles from two bat viruses that share similar structures to human noroviruses, and found that the bat viruses bind to entry histo-blood group antigen (HBGA) receptor binding profiles that overlap with those found in the human viruses.”

“The main takeaway is that classification of the viral sequences by traditional methods would have suggested that the bat viruses were more closely related to viruses found in mice and rabbits, not humans,” Kocher added. “Our results, though, suggest that the rabbit, human and bat caliciviruses may have evolutionarily descended from a common ancestor.”

This common ancestry indicates a potential for bat caliciviruses to bind HGBAs, thereby overcoming a significant barrier to cross-species transmission, potentially to humans. The results reiterate the importance of surveilling populations of wild animals – especially bats – for novel viral pathogens.

This information, the researchers conclude, can help us prepare for the next zoonotic pathogen prior to it emerging and making humans and other mammals sick.