A University of North Carolina at Chapel Hill student startup plans to revolutionize seaweed farming in temperate waters, creating jobs, reducing plastic pollution and cleaning carbon from the atmosphere along the way. 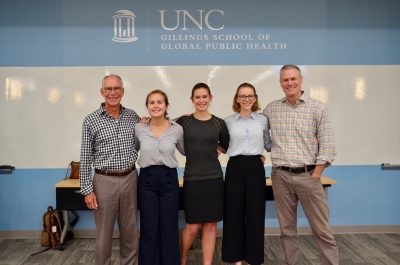 Founded by Carolina undergraduate students Eliza Harrison, Lucy Best and Emily Kian, the Phyta initiative aims to cultivate macroalgae, or seaweed, to be used as a sustainable alternative to consumer products including livestock feed and plastic microbeads in hygiene products. The team believes that by growing and selling seaweed for these uses, they ultimately can address the increasing effects of climate change.

“Our team gauges seaweed as one of the most abundant and underutilized resources in the world,” said Harrison, a senior environmental health sciences major in the UNC Gillings School of Global Public Health. “We’re growing seaweed and harnessing its social, environmental and nutritional potential.”

To combat the climate change, Phyta aims to facilitate seaweed’s transition into an ingredient omnipresent in consumer goods, with the added benefit that the cultivation process traps carbon. (One rig of seaweed grown equals four trees in terms of carbon removed from the atmosphere.)

Since October 2016, the team has incorporated as a company, filed a preliminary patent application, raised nearly $15,000 and installed the first seaweed farm in North Carolina. 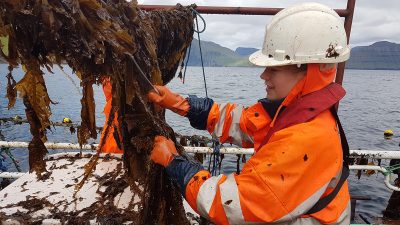 During that time, Phyta also won Carolina’s Hult Prize competition, followed by a regional final in Melbourne, Australia. The team then spent six weeks over the summer with 41 other teams from around the world in the Hult Prize’s prestigious accelerator program, hosted in a castle outside of London. When the program ended in August, Phyta was selected as one of only six global finalists and was invited to pitch their concept to world leaders at the United Nations headquarters.

“The accelerator was the most incredible experience,” said Kian, a junior environmental studies major. “All of the teams became a huge family from all over the world.”

The team members credit part of their success to the campus resources they have utilized throughout their journey.

“The Campus Y [CUBE] has been critical to helping us understand the entrepreneurial part of our enterprise,” said Harrison. “We are non-traditional entrepreneurs with little to no business background, so they have been a huge help.”

“These advisers haven’t known us for long,” said Best, a senior who is majoring in Chinese and political science, “but they believed in us and have supported us in so many ways during this process.”

Two mentors from UNC Gillings were especially instrumental: Kurt Ribisl, PhD, chair and professor in the Department of Health Behavior; and Don Holzworth, MS, the School’s executive in residence and an adjunct professor of health policy and management. 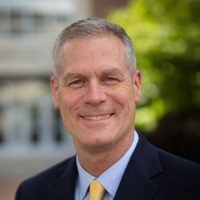 “Phyta has outstanding potential as an emerging student venture,” said Ribisl, who first met Harrison at the Gillings School’s annual World of Difference dinner. “These students are fearlessly tackling tough issues such as climate change, pollution in our waterways and local economic development. I always enjoy meeting and supporting student inventors and entrepreneurs, regardless of their department, and these students are exceptional. I fully expect them to revolutionize the process of growing seaweed in temperate climates, which will help reduce greenhouse gas emissions, provide a high-quality food source for livestock and provide local jobs in developing economies.”

“In my role at the School, it is important for me to find faculty and students with ideas that have great potential for success as commercial enterprises,” Holzworth added. “While I hear many ideas, rarely is there an opportunity to work with a team of students as bright and committed as Emily, Lucy and Eliza. My role now is to continue to mentor them on the path toward successful commercialization. I already have been able to connect them into the local legal community for pro bono support for their company’s incorporation. They will soon be ready for introduction into the funding community, and I will continue to support them with connections in that space.”

After competing for the Hult Prize on Sept. 15, the team members reflected on the students and fellow competitors they met along the way and the impact they’ve had on each other.

“This entire experience has helped me realize that our generation is going to change the world,” said Kian. “Students are recognizing that there are urgent issues out there and they’re eager and enthusiastic in their pursuit for solutions — even if it doesn’t involve seaweed.” 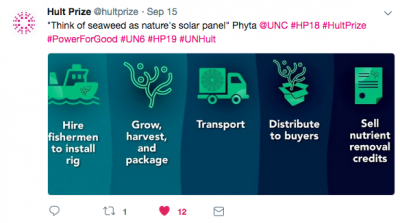 The 2018 Hult Prize was awarded to SunRice, a startup working to prevent waste for rice farmers, but the young entrepreneurs behind Phyta remain focused on their plans to install ocean farms and make a substantial impact on global environmental and human health.

They describe their ongoing aspirations this way: “Changing the world, one seaweed farm at a time.”

Naloxone shortage is over,’ says co-founder of Remedy Alliance