Remembering Joan Gillings, who inspired thousands with her ‘can do, hands on’ approach Joan Gillings passed away on February 18. Her name and her spirit will live on in the Gillings School of Global Public Health.

She died last Thursday at home in Wrightsville Beach, North Carolina, surrounded by her family.

The $50 million gift that Gillings and her former husband, Dennis, pledged to the UNC School of Public Health in February 2007 was transformative.

“It was a privilege to know Joan,” says Karissa Grasty, associate dean for Advancement at the Gillings School. “She was a champion of education and public health, and her generosity, love of students and zest for life were unmatched. She will be sorely missed.”

Born in Philadelphia, the daughter of a clothing model and the president of Whitman Chocolate Co., Gillings, née Heckler, was reared in Grosse Pointe, Michigan. She moved to Chapel Hill in the early 1970s with her two young sons and joined the staff of the UNC Department of Biostatistics from 1974 to 1976.

She also became deeply committed to North Carolina, evolving over the years into a remarkable philanthropist with a special dedication to UNC-Chapel Hill.

“Joan was committed to and fascinated by the research we supported through the Gillings Gift to the School,” says Barbara K. Rimer, DrPH, Alumni Distinguished Professor and dean of the Gillings School. “I remember when we visited a farm in Harnett County where Professor Mike Aitken led a Gillings Innovation Lab. Joan showed up in her Chanel rubber boots and jeans to tour the hog farm, which was using novel methods to reduce methane produced by hog waste. She trudged through the farm with us, asked great questions and was excited by what we saw. Her enthusiasm was palpable.” 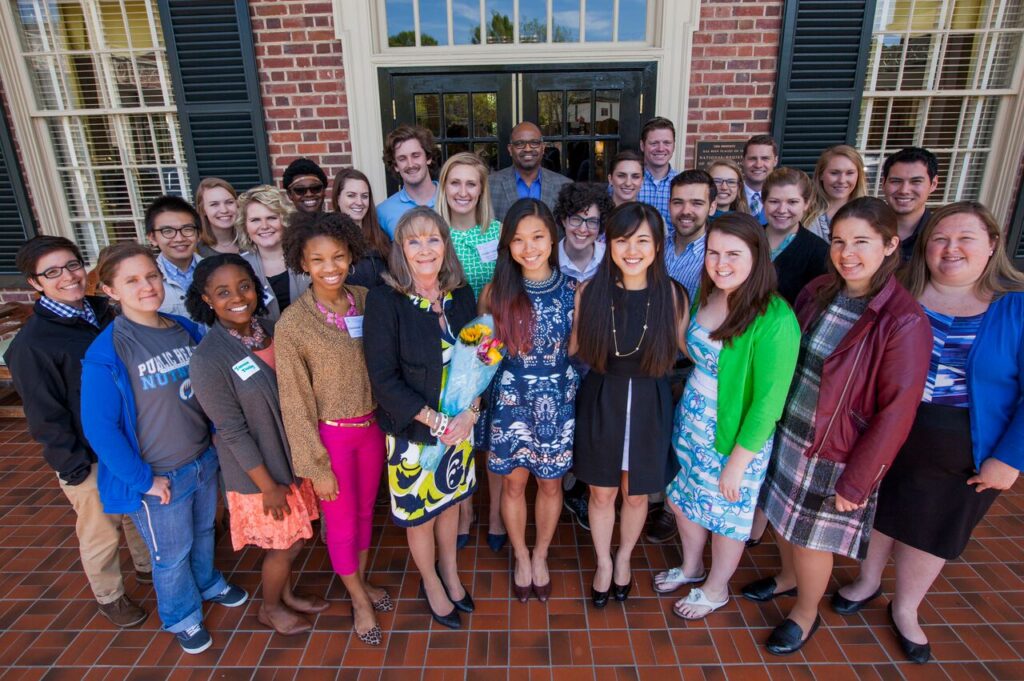 The Gillings Gift also established the School’s Experts in Residence program and, to date, has supported more than 100 Gillings Merit Scholars.

“Joan Gillings was such a good friend to the School,” shares Julie MacMillan, MPH, managing director of Research, Innovation and Global Solutions at the Gillings School. “Her enthusiasm for our students was wide and deep. Many, many times I saw her sit with a student long past the formal end of an event, listening and encouraging that student’s particular talent and interest. She knew the power of showing confidence in someone. What’s more, Joan thought Gillings School faculty and staff were the best in the world, and her financial support of our mission was generous and productive.”

Gillings’ fingerprints are found not only at the Gillings School, but across the UNC-Chapel Hill campus. A true Tar Heel, she served on numerous boards and committees and promoted interdisciplinary achievements. Other institutions close to her heart were Carolina Performing Arts, Morehead Planetarium and Science Center, PlayMakers Repertory Company (their premier facility is named the Joan H. Gillings Center for Dramatic Art), North Carolina Botanical Garden and many others. At UNC-Wilmington, she chaired of the Board of Visitors. 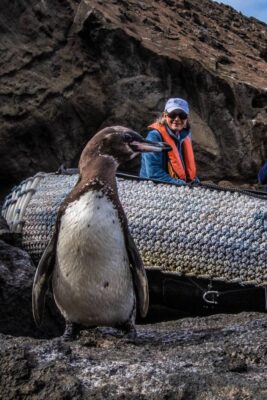 Joan Gillings observes a penguin during a trip to the Galápagos Islands, during which she learned about UNC research efforts.

In the broader community, Gillings was a strong supporter of agencies that combatted homelessness and hunger. An avid reader, she also was interested in history and the arts, and she served as a board member for the North Carolina Museum of Art, the Wrightsville Beach Museum of History and Wilmington’s Opera House Theatre Company.

After the birth of her daughter, Gillings obtained a real estate license. She brokered residential and commercial properties in Chapel Hill and around the world, including in London, England, and Sydney, Australia.

“Joan was a force of nature, a wonderful leader in N.C. and beyond, a person with a big heart and a deeply generous donor who cared especially about our students,” says Rimer. “In the presence of students — who listened to her every word — she was empathic, compassionate and a relentless cheerleader. She participated in many of our commencement ceremonies, supporting graduating students and their families. Joan was close to each of her children and doted on her grandchildren. We grieve her loss and send our heartfelt condolences to her children — Susan, Paul and John — and their families and her many friends around the world. We are grateful that Paul serves on our Public Health Foundation Board and will continue to lead at the Gillings School.”

The family has respectfully requested time to grieve in private. Plans for a future memorial service and ways in which Joan Gillings can be honored will be announced at a later date.