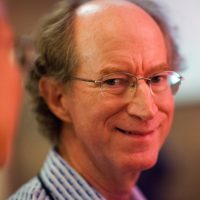 The community at the UNC Gillings School of Global Public Health celebrates the life of David Steffen, DrPH, beloved teacher, practitioner and public health leadership mentor, who passed away in late July 2021. Steffen, a clinical assistant professor in the Public Health Leadership Program (PHLP) until 2017, inspired and guided countless colleagues and public health professionals on their path to become transformative leaders in communities, health departments and other care organizations locally and globally.

A servant leader to his core, Steffen provided guidance with humility, always striving to elevate those he mentored and model the same lessons he gave his students in his own practice. His teachings were founded on the belief that “leadership cannot be taught, but it can be learned.” 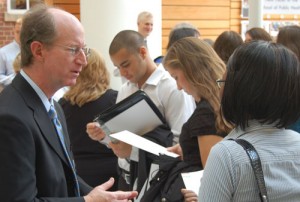 Dr. David Steffen speaks with a student at a leadership event.

“He was extremely knowledgeable about leadership and a ‘leadership guru’ in every sense of the word,” said Anna Schenck, PhD, associate dean for practice and director of PHLP. “Despite his stature, he was a humble person who never took credit for all he taught others. He reflected the leadership lessons back to the students – credited them for having learned. But, to a person, they would tell you he changed their lives!”

His passion for family and community informed his vision in public health leadership. As a part of the United States Peace Corps in Morocco, and later as nurse practitioners in New Mexico, Steffen and his wife, Jill Kerr, connected with local and international community members to understand the experiences and perspectives necessary to make a truly public impact in health care. Led by goals for social justice, they prioritized equity and engaged with indigenous populations as part of public health decision-making strategies.

In the early 1990s, the Gillings School, then called the UNC School of Public Health, launched a re-organization in an effort to focus on public health practice and leadership. One of the by-products was the implementation of the Doctor of Public Health (DrPH) Leadership Program, later followed by a Master of Public Health (MPH) program, with Professor Emeritus Arnold Kaluzny, PhD, appointed as the director of both programs.

Steffen, who worked as district public health director for the State of New Mexico Department of Public Health, was accepted into the DrPH program at UNC and was an early graduate, earning his degree in 2000. “His training as a nurse and experience in public health as the district public health director in New Mexico made him an ideal candidate as a student as we launched the academic program,” Kaluzny recalled. “As a student, alumnus and, for many years, a member of our leadership faculty, one cannot overstate David’s many contributions to advance the concept and practice of leadership within the school and larger practice community, all of whom were the beneficiary of his efforts and expertise.”

Edward L. Baker, MD, MPH, former Assistant Surgeon General who was director of NCIPH at the time of Steffen’s hire, said, “I hold David in the highest regard as a result of working with him at UNC. His integrity and commitment to serving others stood as a model to all of us. His devotion to developing rising public health leaders represented a shining achievement with lasting benefits to all who came to know him. His legacy lives on in the hearts and minds of those emerging public health leaders whom he nurtured and supported. We are all better for having known him.”

“He was a kind and gentle man,” said Associate Professor Claudia Fernandez, DrPH, who collaborated with Steffen at NCIPH on leadership initiatives and a UNC certificate program. “He was a national leader and an inspiration for high-level state leaders participating in NPHLI. David set the culture for collaboration and trust. It was through his support and action that he and I started to get certified in leadership assessments, which are commonly used in leadership institutes. That not only freed our organization from the yoke of high-cost external groups, but it also made us very nationally competitive for other funding because we had so much skill and talent in house.”

Steffen strived to make personal connections with everyone he worked with. “He lived across the street from my parents’ house in New Mexico,” recalled Steve Orton, PhD, a senior fellow at NCIPH who worked with Steffen at NPHLI. “We met when he came to get his DrPH, and I was working as a temp in health behavior. But he had seen me when I came home for holidays. So, when I took his headshot, he said, ‘You look familiar.’ We had never met in New Mexico; we pieced it together in Chapel Hill. And it was typical of the kind of person he was, trying to find out what his connection was to the person taking his picture.”

“David always had a kind and listening ear. He was a gentle and caring friend and colleague,” said Karl Umble, PhD, MPH, who also worked with Steffen for many years at NCIPH. “He was highly respected across the U.S. for being a wise, insightful and humble public health leader who taught others so much.”

A few years later, Professor Emeritus Bill Sollecito, DrPH, was appointed director of PHLP and recruited Steffen to serve as director of the MPH leadership concentration. While his demonstrated passion for leadership had led him to develop critical insight that could shape models of guidance, Steffen was also renowned for his mentorship of students. From application to graduation, he valued every interaction with students and used it as an opportunity to make a personal connection. He often saw potential in applicants that others missed and strove to bring out the best in each student.

“David’s background was as a nurse, and he really cared about people,” Sollecito said. “His style of teaching emphasized one-on-one mentoring and coaching that is a hallmark of professional leadership education, but it’s also an example of how to motivate and connect with all students despite their being geographically separated in PHLP’s distance education program. He cared about their welfare and worked very, very hard to make sure no problem would come up that would prevent one of our students from graduating. Our goal was to graduate every student who entered our program and to help them understand leadership concepts and public health concepts in a way that would help them to do their jobs better and improve their communities, both locally and globally. And the feedback we got from students was that it was working. David played a big part of that.”

Steffen’s mentorship brought students to the Gillings School from many backgrounds, including Professor Rohit Ramaswamy, PhD, MPH. “I often say that I entered Gillings through the back door,” Ramaswamy said. “Unlike many of the students who come to Gillings with well-documented public health accomplishments, I came into the field as an engineer and burnt-out corporate consultant in my late forties looking for new opportunities. I only had a vague idea of public health and what I could do with a degree in this field. I was anxious about a mid-career change to a new field, what I would learn and contribute, and whether faculty and students would wonder why a engineer would want to study public health. David talked to me for hours in multiple phone conversations, assuring me that everyone had a role to play in public health, and that the leadership program not only welcomed but thrived on the diverse backgrounds and perspectives of incoming students. For me, his encouragement, kindness and conviction made PHLP not just another online program but the only program worth my consideration.”

Vaughn Upshaw, DrPH, EDD, professor of public health leadership and lead of the Leadership in Practice MPH concentration, worked with Steffen for nearly three decades, both in New Mexico and at the Gillings School. “I appreciated how David skillfully created ways for students to discover their strengths and encouraged them to see themselves as future public health leaders and change agents,” she noted. “He was thoughtful, kind, generous and devoted to the field of public health. His self-depreciating sense of humor made him approachable, but his unparalleled compassion for others was what set him apart. Anyone who ever met David will have a positive memory of him because he showed such care to each person he met.”

“In life, we will have to manage several balls simultaneously,” Marie Lina Excellent, MD, MPH, recalled him saying, “but be careful. Of all the balls, try to never drop the crystal ball – family – as that one, once broken, cannot be repaired.”

His influence in health leadership extended into the UNC School of Medicine as well, where he co-directed the Academic Career Leadership Academy in Medicine (ACCLAIM) program, which provides leadership education to junior faculty members at the School, with an emphasis on those underrepresented in medicine. The program is beginning its tenth year and has over 100 graduates.

“As a faculty member at PHLP, I worked with David closely to update and adapt his course for a new online global health MPH,” Ramaswamy noted. “I got the opportunity to get a close-up view of his philosophy of leadership, which he not only taught but practiced every day. I got to appreciate his deep-seated belief that everyone is a leader, and I admired his ability to influence, guide and mentor students from behind through kindness, wisdom and humor. I remember being a member of the admissions committee and reaching an impasse on an applicant with an even more untraditional background than mine. David recommended admission and said, ‘I don’t know what your learning community is like, but I doubt you have a lot like her in your class. They are rare – she will give you a good conversation and maybe even make you a great cup of coffee over a conversation given her barista skills!’ This is quintessential David: kind, supportive, focusing on a person’s strength over weakness, humorous and unorthodox. Needless to say, David was right – the student was admitted and thrived in the program.”

“David’s practice experience gave him instant creditably in the classroom, as well with the larger practice community,” Kaluzny said. “Leadership concepts and skills are demonstrated with practical examples — and, as they say, ‘he walked the talk.’ His passion for teaching is well recognized by many awards and, most importantly, his role as a mentor to our alumni as they address the unprecedented challenges to public health and the larger health care community. It is often said, ‘a life well lived is never forgotten,’ and clearly David’s life leaves a legacy of accomplishments and contributions that has made this a better world. His love and dedication to friends, colleagues and, perhaps most significantly, his students is unparalleled.” 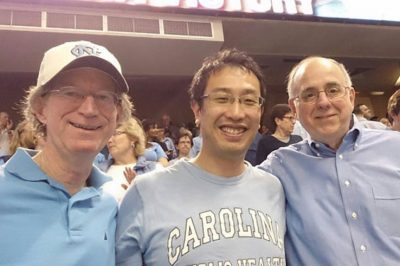 Steffen was known for his love of nature and the outdoors, and he took many kayaking trips with his wife to the Outer Banks to observe birds, sea turtles, deer and other wildlife. He was also an avid lover of sports and could often be found at UNC baseball, basketball or Durham Bulls games with family and students. He believed in sports as a way of bringing people together.

Steffen was never hesitant to share his deep love for family, which was the most important part of his life. His wife, four daughters, two sons-in-law, sisters and grandchildren memorialized him in a small service at the Outer Banks. And at the Gillings School, his kind, inspiring and humble legacy as a leader, teacher and friend will continue to guide the lives of the students and colleagues he loved.

Steffen’s family says that those who loved him can honor his memory by having a root beer float at any UNC sports game. They plan to hold a memorial in the future and advise that any donations in his memory be made to Transitions Hospice in Cary, N.C.