“Elucidating how the racialized social system of whiteness affects the health of white Americans is critically important given current trends.” This quote is the first sentence in a new paper published in Social Science & Medicine. Caroline Efird, MPH, a doctoral student in the Department of Health Behavior at the UNC Gillings School of Global Public Health, is the first author.

Nationwide, communities are embroiled in conversations and protests around structural racism, including inequities in the qualities and outcomes of health care for people of color. Also mirroring the national situation, however, white people in rural North Carolina are experiencing increases in early death at greater levels than any other racial group in the state.

To learn more about this seeming contradiction, Efird conducted health-focused oral history interviews with 13 white people in a low-income, rural community. When analyzing the results, she used a whiteness and health framework, which considers how structural racism both promotes and harms the health of white people.

She found three key themes: color-blind ideology, belief in the American Creed and resistance to change.

“These rural white Americans’ color-blind beliefs and idealization of hard work, self-sufficiency and good character prompt them to 1) ignore the experiences of people of color in their community, 2) assume that individual factors are the primary contributors to health outcomes, and 3) resist change and social programs which could promote health in their community,” Efird says. “These beliefs are rooted in the racialized social system of whiteness and have implications for the health of both white people and people of color in their community.”

Notably, most interviewees perceived that health was primarily connected to hard work and individual effort — not considering how it also is related to systematic social determinants of health, which are out of any one person’s ability to control. This individual-level blame, plus resistance to change, influenced interviewees’ political opinionss and created suspicion of social programs that could benefit the health of their community. 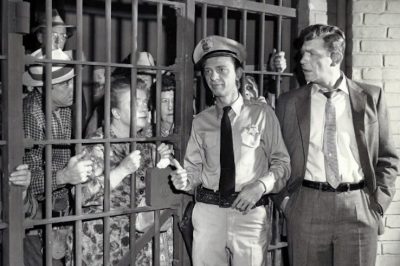 This is a 1961 photo from the television program The Andy Griffith Show, which shared stories from the fictional town of Mayberry.

“These findings are related to the two most pressing issues facing the United States right now: structural racism and COVID-19,” says Efird. “For instance, the people I interviewed largely ignored the ways that structural racism has negatively affected the health and well-being of Black residents in their community. They explicitly and figuratively compared their community to the fictional 1960s sitcom town of Mayberry, where everyone got along, the sheriff didn’t carry a gun and there was never any racial tension However, Mayberry is a whitewashed version of utopia — a utopia that ignores how white racial supremacy and oppression are embedded in everyday American life.”

“Many of the interviewees also resented governmental assistance via health care and social programs, such as the Affordable Care Act (ACA),” she adds.“It’s interesting that they live in an economically disadvantaged region that is classified as having a shortage of health care professionals. Both white and Black residents in the community could have benefited from Medicaid expansion under the ACA, yet interviewees suggested that most people in their (predominately) politically conservative community were opposed to the ACA. Some considered the ACA to be an egregious step of government overreach and felt that it was an imposition on their individual freedoms as American citizens. As such, I am left wondering how white people in their community have reacted to state level public health mandates regarding face masks and social distancing. Tragically, COVID-19 cases in their county have increased by over 250% since mid-June.”

As Efird begins working on her doctoral dissertation, she hopes to further investigate how the racialized social system of whiteness and white identity shape the  health outcomes and health beliefs of North Carolinians in rural areas. She believes that with a deeper understanding of racialized differences around health care, practitioners can better address population specific health needs and ultimately decrease rural health disparities in North Carolina and beyond. “As Caroline’s adviser, I am proud of her for what is a really interesting paper, especially given these times and the intensified focus on racism as a public health issue,” says Alexandra Lightfoot, EdD, assistant professor of health behavior at the Gillings School and co-author of the study. “Complementing the extensive literature on the disproportionate impact of structural racism on the health of people of color, this paper contributes nuanced insights and raises important questions about the impact of whiteness on the health of white people within our racialized social system.”