New research from the UNC Gillings School of Global Public Health suggests that manipulating gut microbiota – microorganisms that live in the digestive tract – can mitigate the effects of arsenic exposure, a known cause of heart disease. Researchers say the findings can be used to guide the development of new medical treatments to help prevent arsenic-related cardiovascular disease. 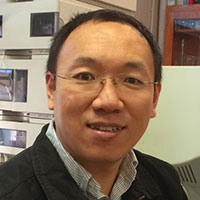 Kun Lu, PhD, associate professor of environmental sciences and engineering, and his team shared their findings in a paper titled, “Lipid and Cholesterol Homeostasis after Arsenic Exposure and Antibiotic Treatment in Mice: Potential Role of the Microbiota” published online by Environmental Health Perspectives.

Previous research has shown that arsenic exposure has a harmful effect on lipid and cholesterol levels in the body, which in turn can lead to cardiovascular disease. Specifically, arsenic exposure inhibits the signaling of liver X receptors/retinoid X receptors (LXR/RXR), which modulate the expression of genes involved in lipid metabolism and thus affect the equilibrium of lipids and cholesterol.

In their study, Lu and his team sought to explore the role of gut microbiota in arsenic-induced LXR/RXR signaling inhibition and the subsequent negative impact on lipid and cholesterol balance in the bloodstream.

According to Lu, human exposure to arsenic is widespread, occurring primarily through drinking water and diet.

“Millions of people in the United States who are drinking private well water may be exposed to arsenic levels above the EPA standard, which is 10 parts per billion,” he says.

Lu’s research previously has demonstrated that gut microbiome is a key factor in arsenic biotransformation, and depletion of the microbiome leads to arsenic detoxification. Knowing that arsenic exposure can lead to cardiovascular disease, his team sought to understand whether the gut microbiome could be leveraged to reduce the toxic effects of arsenic on lipid metabolism.

During the study, antibiotic-treated mice (AB-treated mice) and mice not treated with antibiotics (conventional mice) were exposed to 0.25 parts-per-million (ppm) and one part-per-million arsenic for two weeks. The researchers quantified the expression levels of genes associated with LXR/RXR signaling by real-time polymerase chain reaction, and they measured serum and hepatic cholesterol levels.

“Our hope is that these findings will lead to a better understanding of individual susceptibility in arsenic-induced disease,” says Lu. “We need to develop microbiome-based intervention strategies to reduce related disease burdens.”