On September 27, the UNC-Chapel Hill General Alumni Association recognized three alumni whose efforts have helped improve the lives of others with its Distinguished Young Alumni Awards. The 2019 recipients are:

The awards were presented by the GAA Board of Directors at its fall meeting. The GAA has given the awards since 1989, recognizing alumni age 40 or younger at the time of their selection for bringing credit to the University through their achievements. 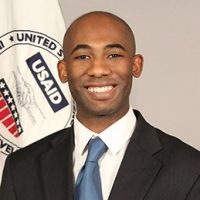 Lanakila “Ku” McMahan ’07 (MPH, ’11 PhD) helps entire populations live a better life through a combination of research and entrepreneurship. That’s what he’s done ever since he enrolled at UNC’s Gillings School of Global Public Health.

After earning a master’s degree from the Department of Environmental Sciences and Engineering at the Gillings School, McMahan worked with Gillings’ Mark Sobsey, PhD, a now-retired professor of environmental sciences and engineering to invent a water-quality test and started a company called Aquagenx. McMahan has focused his whole career on water sanitation and hygiene and water quality and — in recent years — he has turned his attention to water scarcity.

“The world is in trouble,” McMahan said. “We don’t have enough food and water. Lots of nonprofits are working on the problem, but they don’t have access to enough capital.”

After completing his doctorate at the Gillings School, McMahan taught research at Florida International University and oversaw the West Africa Water, Sanitation and Hygiene Program, a USAID project. At that time, he homed in on the need to grow more food with less water.

In 2012, he joined Securing Water for Food, an international partnership of USAID, Sweden and the Netherlands, working with entrepreneurs from around the world who have products or techniques to increase crop yield in developing countries.

“What I learned at the Gillings School still serves me ever day,” McMahan shared. “I learned that it’s imperative to work in teams, because one person alone can’t solve any challenge, and technology by itself won’t work, either.”

McMahan’s organization provides funding and guides startups to investors who can help them grow. As the team lead, he helps improve their business models, long-term strategies and technologies. So far, the project has helped upward of 6.3 million farmers. 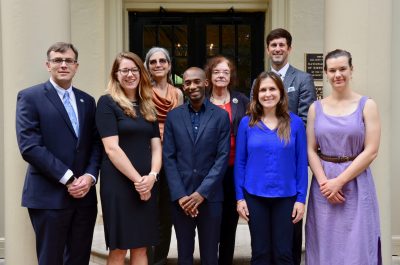 In the 40 or so countries he has visited, McMahan matches farmers who have had bad harvests with a technology or innovation, such as fungal armor that protects seeds from drought, a solar-powered desalination machine, a pre-spaced seed tape that includes fertilizer, a small weather station that talks to insurance companies and lowers the farmer’s rates, or irrigation hardware that boosts water efficiency by 50%. To date, Securing Water for Food has saved more than 10 billion liters of water.

“That makes a real difference in their lives,” McMahan said. “It means they can get vaccines, send their kids to school, get health care or have savings.”

“Our Department of Environmental Sciences and Engineering is the first in the U.S. to be housed within a school of public health,” said Barbara Turpin, PhD, professor and chair in the department. “That unique combination facilitates exactly the kind of life-saving work Ku is doing. Climate change is already increasing the incidence of floods and droughts, which in turn have an impact of public health. To respond, we’ll need more engineers and scientists like Ku who see the world through a public health framework and are versed in the social sciences and cultural competency.”