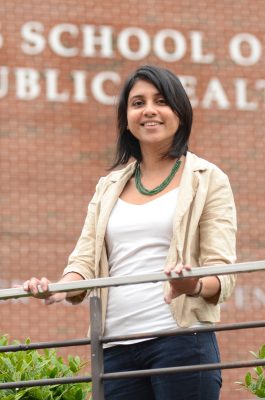 Maya Nadimpalli, PhD, a master’s and doctoral alumna of the UNC Gillings School of Global Public Health’s Department of Environmental Sciences and Engineering, has focused much of her work on eradicating antibiotic resistance among children in developing nations – efforts that recently were featured in Nature magazine’s Career Q&A.

From 2015 to 2018, Nadimpalli led a field study on food and the spread of antibiotic-resistant bacteria in Cambodia. An epidemiology postdoctoral scholar and Gillings Global Health Fellow at the Pasteur Institute in Paris at the time, she uncovered risk factors for human exposure by conceptualizing epidemiological approaches for the analysis of bacterial whole genome sequencing data.

Nadimpalli says that the beginning of her master’s program at the Gillings School marks when she became interested in microbiology.

“I was interested in how interactions between humans and their environment could impact health, but I had previously approached this topic from the perspective of chemical contamination,” she says. “I joined UNC at a time when there was growing global interest in how antibiotic use in food animals – namely, pigs – could be selecting for antibiotic-resistant Staphylococcus aureus that could spread to workers and their families. This topic was getting a lot of attention in Europe, where a new strain of methicillin-resistant S. aureus (MRSA), called MRSA ST398, had begun to be detected in pigs, pig farmers and veterinarians in multiple countries.”

As many of these countries have strict hospital infection control practices, health authorities were alarmed when this new MRSA strain associated with livestock exposure began colonizing and causing infections in healthy people. When Nadimpalli started her postdoctoral research as a Gillings Global Health Fellow, however, there was still little research from the United States and Europe suggesting that antibiotic use in livestock could affect people who were not directly exposed to animals.

“And no one had really studied what was happening in low-income, yet rapidly developing, countries — especially those where both meat consumption and antibiotic use are increasing dramatically, such as Cambodia,” she told Nature.

“Working on this type of research required a whole range of skill-sets, including microbiology, epidemiology and community outreach,” Nadimpalli says. “I was lucky enough to have wonderful mentors at the Gillings School, such as  Jill Stewart, Steve Wing and Chris Heaney —who is now at Johns Hopkins University — to help me approach this topic from these multiple perspectives, and with the end goals of helping people and raising awareness.”

Now a research fellow at the Center for Integrated Management of Antimicrobial Resistance at Tufts University, Nadimpalli is looking to answer questions from a ‘one health’ perspective.

Nadimpalli plans to combine this work with research on how scientists can protect people from becoming colonized with antibiotic-resistant bacteria — particularly young children in developing countries, where the antibiotic resistance crisis is expected to be most acute.

She is interested in using metagenomics to understand how children’s gut microbiomes develop over time in low-resource settings to understand how to help children develop healthy microbiomes that are less susceptible to colonization. She also seeks to explore how animal-origin bacteria might be contributing to the burden of antibiotic resistance in healthy communities in lower-income countries, particularly those where industrial food animal production is increasing.

“Many of these countries do not regulate food safety as strongly as we do in the United States or Europe, and antibiotic administration to animals may not be regulated, either. I’m interested in seeing if antibiotic-resistant bacteria from these types of farms could be colonizing or infecting healthy persons in the community. My goal is to identify ways we can prevent this.”