EPID alumnus working to prevent spread of measles in Ohio 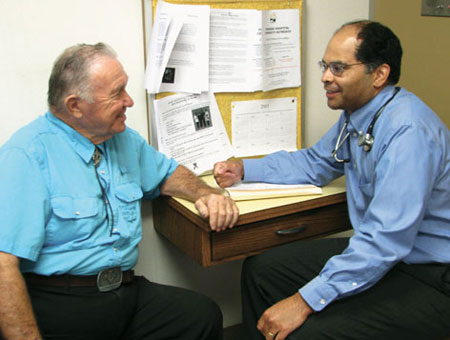 Dr. D.J. McFadden chats with a client. Photo courtesy of The Mennonite magazine.

Dwight (D.J.) McFadden III, MD, MPH, health commissioner in Holmes County, Ohio, is among those Gillings School alumni who are putting their education at UNC to good use.

McFadden, who received a Master of Public Health in epidemiology at the Gillings School in 1997, now works to manage a measles epidemic in Holmes County known to have infected 54 people as of July 2 which has resulted in at least one hospitalization.

The outbreak may cause particular difficulties for the county’s Amish community, whose members do not vaccinate youngsters against infectious diseases such as measles.

The Ohio outbreak is the biggest in the U.S. since 1994. Overall, the Centers for Disease Control and Prevention are tracking 529 cases in 20 states, including large outbreaks in California and New York.

Read accounts of McFadden’s work and the situation in Ohio from the Associated Press and Fox News in Cleveland.