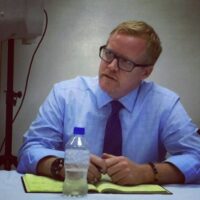 The U.S. Centers for Disease Control and Prevention (CDC) deployed Shane Diekman, PhD, to study how SARS-CoV-2, the virus that causes COVID-19, spreads in skilled-nursing facilities in Minnesota. While there, he developed a series of tools to aid and protect frontline workers in these facilities.

In his typical role with the HIV testing services team in the Division of Global HIV and TB at the CDC, he supports the implementation and evaluation of HIV programs. This gave him experience scaling up and ensuring the quality of diagnostic testing and conducting contact tracing for newly diagnosed cases. It also gave him experience working under the direction of former Ambassador-at-large, Deborah Birx, MD – the former White House COVID Task Force coordinator and global AIDS coordinator overseeing the U.S. President’s Emergency Plan for AIDS Relief (PEPFAR).

During his time working with the skilled nursing facilities in Minnesota, Diekman noticed the emotional toll COVID-19 outbreaks were having on staff. This led him to develop a “Psychosocial Toolkit” for health care leaders and workers to deal with common mental, emotional, and psychological challenges brought about by the pandemic.

“This project was not originally part of the mission, but it became evident that this was a much-needed resource,” he said.

Diekman, who earned a Doctor of Philosophy degree in health behavior and education from the UNC Gillings School of Global Public Health in 2004, was deployed as a behavioral scientist on the team the CDC charged with supporting the Minnesota Department of Health’s efforts to control and prevent the spread of SARS-CoV-2 at skilled-nursing facilities. The team conducted serial testing for the virus among staff and patients at two such facilities in the state, which involves testing the same population multiple times over the course of several weeks. This method was employed to contribute to an understanding of the scope and magnitude of the problem, and Diekman found the results eye-opening.

“What really hit me was the Epidemic Intelligence Service (EIS) officer telling me that, based on her experience the last time, the initial round of testing was about one-third of what we can expect by the final round of testing, before things start to get better,” he said. “And she was right.”

Serial testing captures both symptomatic and asymptomatic cases of COVID-19 – giving a more comprehensive, and worrisome, picture of how the disease spreads through these facilities. By tracking genetic variants of SARS-Cov-2, the team was able to confirm intra-facility transmission. This allowed them to better understand the risks that staff and residents faced.

In the resulting Morbidity and Mortality Weekly Report, which Diekman coauthored, the team articulated this risk and stressed the importance of such infection-control practices as masking, physical distancing and handwashing to protect staff and patients alike from contracting COVID-19 within skilled-nursing facilities. Among other recommendations are improved testing participation among healthcare providers, flexible medical leave, and timely result reporting.

The Minnesota Department of Health developed a digital version of his psychosocial toolkit as a statewide resource for frontline workers responding to the pandemic and their managers.

When asked about broad lessons this experience taught him, Diekman was struck by the complexity and difficulty of leaders attempting to respond to evidence in real time to make decisions.

“It reinforced my belief that leaders – many of whom don’t have backgrounds in public health or science – have to make really tough decisions on how to interpret the evidence they’re presented with and make policies,” he said. “Especially when the wrong decisions can have dire consequences.” He added.

For many CDC employees, the COVID-19 pandemic has meant crushing workloads with no end in sight. When asked about what inspires him to keep going, Diekman had a ready answer.

“I’m inspired by my colleagues,” he said. “Not only how resilient they are, but the passion that drives them even under tremendous stress and uncertainty. Many of them have left their families to deploy, and others are working two jobs at once. And, of course, the front-line workers who have been asked to do more than we could have ever expected.”