Crisis pregnancy centers (CPCs), also called pregnancy resource centers, are non-profit and often religiously affiliated organizations that operate with the goal of convincing people considering abortion to continue their pregnancies. With more than 2,500 locations across the U.S., they are more prevalent than abortion clinics but do not provide the same level of pregnancy-related care. Many do not provide medical care at all. 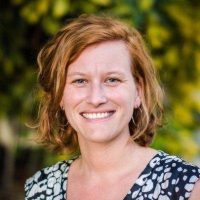 Researchers like Alice Cartwright, a doctoral student in the Department of Maternal and Child Health at the UNC Gillings School of Global Public Health, are seeking to understand what proportion of people visit CPCs during their pregnancies. New findings from a study she has co-authored suggest that these centers are not meeting the needs of people seeking information on abortion.

Cartwright and Katherine Tumlinson, PhD, assistant professor of maternal and child health at the Gillings School, collaborated on the study with Ushma Upadhyay, PhD, MPH, associate professor at the University of California at San Francisco, with the aim of understanding more about the people who visit CPCs and whether those visits had an impact on their pregnancy outcomes.

The study was part of a larger Google Ads Abortion Access Study, which sought to understand how structural, interpersonal and individual factors impacted the likelihood that a person seeking abortion information online could ultimately obtain one. The study had a unique recruitment structure: people searching for abortion information in Google were shown an advertisement for the study, and they were eligible to participate if they reported they were pregnant and considering abortion. While most studies of abortion care recruit participants at clinics, this study sought to recruit people earlier in the decision-making process to better understand their experiences and barriers to care.

State abortion restrictions have contributed to the reduction of abortion clinics in many parts of the United States, which places a burden on pregnant people seeking abortion. Rather than travel significant distances, they may instead seek care at a nearby CPC. And because CPCs are often branded with ambiguous names and market free pregnancy-related services, like ultrasounds, people seeking abortions may visit a CPC without realizing it does not provide abortion care. Previous research has shown that as abortion care becomes less available, the impacts are disproportionately felt by communities of color, those without health insurance, or those of lower socioeconomic or educational status.

“While historically CPCs just provided pregnancy tests and counseling, more and more now offer ultrasounds, which makes them appear as legitimate health care providers,” Cartwright explained. “However, most staff of CPCs are volunteers, not trained clinical providers. Unlike abortion facilities, which provide counseling on all available pregnancy options, CPCs do not provide abortion care or referrals and often provide false information about the risk of abortion. In reality, the risk of death from childbirth in the U.S., while low, is approximately 14 times that of an abortion.”

After the study team reviewed CPC names and locations provided by respondents, they found that around 13 percent had visited a confirmed CPC. This is the first national estimate of CPC visits by pregnant people considering abortion, who are purported to be the main target of CPCs. Four weeks after the baseline survey, those who had visited a CPC were significantly more likely to either be pregnant and still seeking an abortion or planning to continue the pregnancy (versus having had an abortion).

Findings from the study underscore the need for public health practitioners to find new and better ways to reach pregnant people seeking information on pregnancy and abortion options, both in-person and online. Ensuring broad access to the unbiased information they are seeking can help people make the decision that is best for them and show them where to find affordable and reliable health care.

Cartwright says there is still more to learn about at what point in pregnancy people visit CPCs and what services are being sought. Future studies will help health care providers, researchers and advocates determine if those needs are being met and whether people are receiving accurate information about all options for care that are available.