Wildfire smoke is one of the largest sources of air pollution, with plumes that emit fine particulate matter and other gases that are harmful to health. As climate change and population growth continue to increase the risk of wildfires near urban areas, experts are concerned that even short-term exposure to smoke may have an impact on cognitive ability.

With help from the brain training app Lumosity, environmental health scientists recently found that adult attention spans are significantly lower in the hours and days after exposure to fine particulate matter (PM2.5) and wildfire smoke. This finding was especially prominent among those in the western United States, where wildfires have been increasing in frequency and intensity. 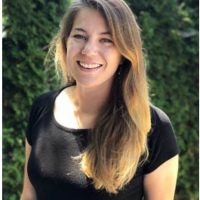 “This study contributes to the body of knowledge that air pollution causes adverse health outcomes beyond cardiovascular and respiratory impacts,” said Stephanie Cleland, a doctoral student in environmental sciences and engineering at the UNC Gillings School of Global Public Health. “Neurological impacts from air pollution are a special concern to communities in wildfire-impacted regions because of their recurring exposures to smoke.”

Cleland, who is also a research fellow at the Oak Ridge Institute for Science and Education at the U.S. Environmental Protection Agency (EPA), is first author on a new publication in Environmental Health Perspectives that shares these findings.

In the study, she and fellow Gillings School co-authors Marc Serre, PhD, and Jason West, PhD, collaborated with EPA researchers to cross-reference the scores from thousands of players of the Lumosity game “Lost in Migration” to PM2.5 concentrations estimated using data from the EPA’s Air Quality System and the PurpleAir network of monitors.

It’s one of the first studies of its kind to use Lumosity data to investigate the association between short-term air pollution exposure and cognitive performance, as well as the first to examine these associations on both daily and hourly timescales among a large group of adult players.

Senior author Ana Rappold, PhD, a branch chief in the Public Health and Integrated Toxicology Division of the EPA’s Center for Public Health and Environmental Assessment, has been a long-time researcher into human health impacts of wildfire smoke, along with co-author Sarah Henderson, PhD, scientific director of environmental health services at the British Columbia Centre for Disease Control and the scientific director of the National Collaborating Centre for Environmental Health.

“We often hear anecdotal evidence of people experiencing increased fatigue or ‘brain fog’ during wildfire season,” Rappold said. “However, data on cognitive function is often difficult to obtain. Lumosity provided a unique opportunity to look at the longitudinal cognitive effects of air pollution.”

“Lost in Migration” shows players a flock of birds, each oriented in various directions, and asks them to identify whether the bird in the center is pointing up, down, left or right. More and more flocks appear based on a user’s response rate, and players are scored on their speed and accuracy. Previous studies have shown that the game can reliably measure, and even improve, cognitive focus and attention span.

In an analysis of more than ten thousand adults who played 20 rounds of the game, researchers found attention scores were lower (an average reduction of 3.7%) among those who were in areas with high daily and hourly concentrations of PM2.5. A player’s score dropped by more than 20 points with each increase of 10 micrograms per cubic meter of PM2.5 exposure.

These decreases were more pronounced among players who were in states that had been heavily impacted by wildfire smoke, including Oregon, Washington, California, Montana, Idaho and Nevada.

Overall, users in the continental U.S. lost an average of 529 points over the course of 20 games due to PM2.5 exposure, with players in western states losing an average of 887 points due to PM2.5 exposure. Cleland said the higher reduction in score in the western U.S. may also be due to different PM composition, co-exposure with other pollutants or other wildfire-related impacts, such as eye irritation or increased anxiety and stress.

The impact on attention span was most noticeable within the first three hours of PM2.5 exposure, and researchers noted some effects for up to two days. While the findings from this study suggest that this impact on cognitive function may be temporary, the fact that attention span also decreased among players who were not recently impacted by wildfires suggests that there may be some long-term implications to ambient PM2.5 exposure across the country.

Because the study only looked at one aspect of cognitive function, further research could shed light on the full range of neurological risks posed by short-term exposure. Building off this project, the team plans to investigate the long-term implications of exposure and examine the separate effects of stress and anxiety from the effects PM2.5 and smoke exposure.

“We believe Lumosity is a powerful tool for epidemiologic studies investigating the impacts of environmental exposures on cognitive function,” Cleland said.