“In losing Clarence, we have lost one of the ‘greats’ among our School’s alumni,” said Jo Anne Earp, ScD, professor of health behavior at the Gillings School. “For the past 20 years, well beyond the age when many have retired, he was a national leader on global aging. As a board member for AARP and the author and editor of multiple books, he was a powerful advocate for leveraging public health approaches to support healthy global aging, including walkable communities, universal housing design and much more.” 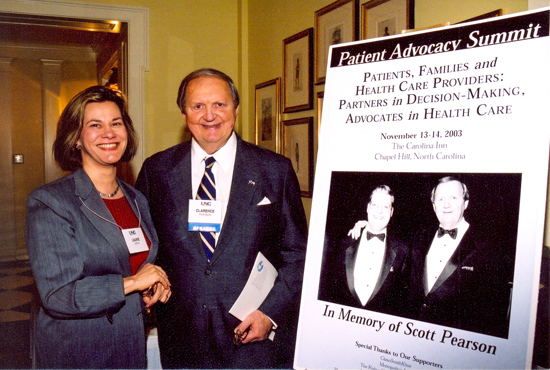 Clarence Pearson and his wife Laurie Norris (left) attended a 2003 Patient Advocacy Summit at the Carolina Inn. Hosted by the UNC School of Public Health, the summit was made possible by seed funding from Pearson and Norris.

Pearson, who received his master’s degree from UNC in health behavior and health education in 1952, was a steadfast supporter of the Gillings School and what is now its Department of Health Behavior. In 2002, he and his wife, Laurie Norris, created the Scott and June Pearson Memorial Fund for Patient Advocacy. The fund has helped support efforts by health behavior students and faculty and staff members to improve patients’ health outcomes by humanizing and refining patient/provider communications and through system-level advances in health care.

In spring 2006, an article in Carolina Public Health magazine featured Pearson and described how his passion about patient advocacy grew out of experiences with his late son Scott’s trying to navigate hospital bureaucracies.

Pearson was founding president and chief executive officer of the National Center for Health Education, established in 1975 by presidential commission, and was a former senior adviser to the United Nation’s World Health Organization. He served as vice president of the Peter F. Drucker Foundation for Nonprofit Management (now the Leader to Leader Institute) and vice president and director of health and safety education for Metropolitan Life. There, he directed a nationally recognized corporate health education and safety program that pioneered in the development of school health, patient education and worksite programs. He conducted a comprehensive feasibility study that established the MetLife Foundation, encouraging innovative funding in health, education and human services.

It was during those years that Gillings School faculty member, Laura Linnan, ScD, professor of health behavior, first met Pearson.

“Clarence interviewed me when I was a very young professional without much experience, but because I was trained as a health educator and shared his passion for the work, he gave me the opportunity to work at MetLife’s Center for Healthy Living, where we provided health promotion services to 37,000 employees nationwide and many of MetLife’s large corporate accounts. While there, I learned from him every day.”

“He was always ‘connecting’ people and moving the field forward,” she said. “He was always positive, strategic and extremely generous with his ideas, as well as his work-related and personal resources. He was fun-loving with a fantastic sense of humor and keen memory for details. He also had a love of lifetime learning. In his career, he was an amazing ambassador for health education and public health in the States and globally. He will be greatly missed.”

Gordon DeFriese, PhD,  director of UNC’s Cecil G. Sheps Center for Health Services Research from 1973 to 2000, was friend and colleague to Pearson for more than 40 years.

“He was the ultimate ‘networker,’” DeFriese recalled. “There was hardly a year I knew him when he did not introduce me to two or three important people working in areas of interest I shared. I was amazed at how far ahead of others he seemed to be, always sensing opportunities to get the job of health improvement done more effectively. Yet he was the quintessential ‘gentle man’ – a talented artist and graphic designer and the builder of elaborate full-scale models of classic Viking sailing ships, some of which are now on permanent display at the N.Y. Academy of Medicine. He was the older brother I never had.”

More about Pearson’s active life, including volunteer and business activities, is available on the Health News Digest site. An interview conducted by the Vitality Institute is available here. An obituary was published June 1 in The New York Times.