As the entrepreneurial community continues to flourish across the Research Triangle region, female entrepreneurs at UNC-Chapel Hill – including Susanna Choi, a graduate student in the nutrition department at the UNC Gillings School of Global Public Health – are blazing a trail via a new Women’s Innovation Council. 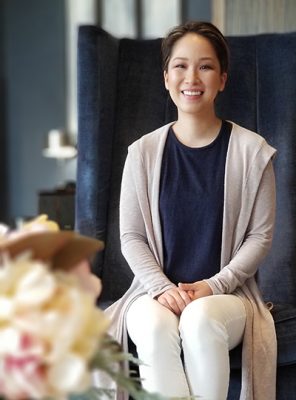 The council is a partnership between UNC and North Carolina State University. It was launched in the fall of 2018 by Sheryl Waddell, director of the Innovate Carolina Global Network, who aimed to create bridges between local universities to enhance opportunities for female entrepreneurs.

The council’s ultimate goal is to accelerate the pipeline of female innovators and provide a model that can be replicated and expanded throughout the state and beyond.

Choi is one of five UNC students nominated to participate in the inaugural council cohort. She was nominated by Julie MacMillan, MPH, managing director, and Christin Daniels, MA, senior director, of the Research, Innovation and Global Solutions office at the Gillings School. Choi is a graduate research assistant in the office; MacMillan and Daniels both knew of her interest in entrepreneurship.

Prior to her graduate studies at the Gillings School, Choi received a Bachelor of Science in Business Administration from the University of California, Berkeley, was a consultant at Deloitte, and worked for a number of technology startups in the Bay Area.

“Although I have a business background, I knew I needed the public health education to equip myself with the tools, diverse perspectives, and network to build a solid company and be an effective leader,” Choi said.

Choi plans to combine her background in business with her nutrition education to launch a social enterprise.

The other UNC students in the inaugural cohort are Kelsey Van Dyke, a graduate student at the School of Education; Denali Dahl, a doctoral student in the Carolina-N.C. State Joint Department of Biomedical Engineering; Angelina Patel, an undergraduate computer science student; and Anna Spove, an undergraduate at the Kenan-Flagler Business School.

“As female entrepreneurs or entrepreneurs-to-be, we face similar barriers, stereotypes and biases in the male-dominated world of startups,” Choi said. “In 2017, 98 percent of venture capital funding went to male-founded startups.”

Yet, Choi sees evidence for optimism in the work that’s underway with the council.

“As dismal as that statistic is, data also show that startups founded or co-founded by women are performing better than male-founded startups over time,” she added. “This reaffirms that women are just as capable, if not more so, than their counterparts when it comes to building and running successful companies. It also validates the fact that underlying, systemic issues of sexism and other biases cause a lot of these disparities.”

“As a member of the Women’s Innovation Council, I hope to develop friendships and camaraderie with other like-minded women and empower and support one another to disrupt the status quo and play against the odds,” Choi said. “I also hope to connect with female trailblazers who have already weathered the challenges of building successful startups, so I can learn from their experiences.”