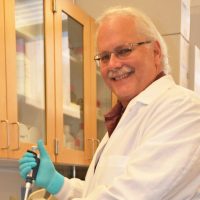 Ralph Baric, PhD, William R. Kenan, Jr. Distinguished Professor at the UNC Gillings School of Global Public Health, is one of four professors at UNC-Chapel Hill who have been newly inducted into the National Academy of Sciences — one of the highest distinctions for a scientist or engineer in the United States. The academy announced on April 26 the election of 120 members and 30 international members in recognition of their distinguished and continuing achievements in original research.

New members are elected by their peers each year based on their contributions to their fields.

Baric, a professor of epidemiology, microbiology and immunology, is known for his visionary research on some of the most infectious viruses — particularly coronaviruses, noroviruses and flaviviruses. His scientific discoveries made a significant impact on the COVID-19 pandemic by identifying antivirals to fight COVID-19 and collaborating with the National Institutes of Health to test vaccine candidates.

In addition to Baric, UNC-Chapel Hill’s newly elected members include: