American Academy of Arts and Sciences elects 3 from Carolina 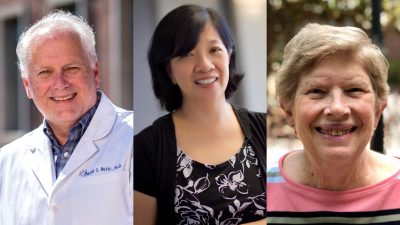 Two current faculty members and one faculty emerita with the University of North Carolina at Chapel Hill were elected to the American Academy of Arts and Sciences on April 28.

The three join the 39 UNC-Chapel Hill faculty previously elected to the American Academy of Arts and Sciences.

Founded in 1780, the American Academy of Arts and Sciences is both an honorary society that recognizes and celebrates the excellence of its members and an independent research center convening leaders from across disciplines, professions and perspectives to address significant challenges.

For more than 240 years, the Academy has been electing and engaging exceptional individuals. This year’s election of 261 new members continues a tradition of recognizing accomplishments and leadership in academia, the arts, industry, public policy and research.

“We are celebrating a depth of achievements in a breadth of areas,” said David Oxtoby, president of the American Academy. “These individuals excel in ways that excite us and inspire us at a time when recognizing excellence, commending expertise and working toward the common good is absolutely essential to realizing a better future.”

“The Academy was founded on the belief that the new republic should honor truly accomplished individuals and engage them in meaningful work,” said Nancy C. Andrews, chair of the Academy’s board of directors. “The Academy’s dual mission continues to this day. Membership is an honor and also an opportunity to shape ideas and influence policy in areas as diverse as the arts, democracy, education, global affairs and science.”

Find the complete list of individuals elected in 2022, including 37 International Honorary Members from 16 countries.

Baric, Gray and Ting join a distinguished group of individuals elected to the Academy before them, including Benjamin Franklin and Alexander Hamilton in the 18th century; Ralph Waldo Emerson and Maria Mitchell in the 19th; Robert Frost, Margaret Mead, Martin Luther King Jr. and Condoleezza Rice in the 20 century; and, since 2000, M. Temple Grandin, John Legend, Joan Baez and Sanjay Gupta.