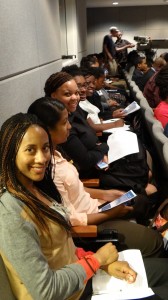 Studio Audience at the 2013 Webcast – Early Childhood Development: Investing in Our Children and Our Future

Previously known as The Annual Summer Public Health Research Institute and Videoconference on Minority Health, the National Health Equity Research Webcast emphasizes issues and solutions related to collecting and analyzing data for racial and ethnic populations, studying the relationship between race and socioeconomic status, identifying and reducing barriers to conducting research in minority communities, and devising surveys to study minority populations and subpopulations.

This unique forum enables experts in the area of health equity to reach an audience of hundreds of researchers, educators, administrators, practitioners and students throughout the U.S. The broadcast originates from the University of North Carolina at Chapel Hill. Recent programs are available as on-demand webcasts. Videotapes of some broadcasts are also distributed by the Public Health Foundation. The Institute and Videoconference trace their origin to 1993, when Drs. Trude Bennett, Dorothy Browne and Lloyd Edwards founded the UNC School of Public Health Minority Health Project. Funding was provided by the Minority Statistics Grants Program, directed by Audrey Burwell, in the National Center for Health Statistics, Centers for Disease Control and Prevention through a cooperative agreement with the Association of Schools of Public Health. The objectives of the Project were to improve the quality of available data on racial and ethnic populations, expand the capacity of minority health researchers to conduct statistical research and develop research proposals and foster a network of researchers in minority health. The three specific aims were to:

The first aim was accomplished through development of an online database of literature citations extracted from various sources through an expanded set of search terms. Search statistics indicated as many as 4,000 literature searches per calendar quarter until the database was retired in 1999 by which time MEDLINE searches could be carried out free over the Internet. The inventory of datasets grew to contain over 700 entries of national, regional, and local data with descriptors that could also be searched online. The Inventory logged as many as 4,000 searches per year until being retired in 1999, by which time government agencies and other generators of data had begun to publish descriptions of their datasets on the internet.

Development of the research database and dataset inventory helped to identify gaps in the minority health research literature and data. Sessions in the Summer Public Health Research Institute on Minority Health were then designed to explore methods to fill these gaps. As a run-up to the Institute, Drs. Bennett, Browne and Edwards offered a short course entitled “Race, Ethnicity, and Public Health Research: Issues and Methods” at the University of Michigan’s Graduate Summer Session in Epidemiology in July 1994. The following year the one-week Summer Minority Public Health Institute was presented at the University of North Carolina School of Public Health, with over 20 faculty and approximately 80 participants.

The Institute was renamed the Annual Summer Public Health Research Institute on Minority Health and repeated in 1996. In 1997, funding from the National Institute of General Medical Sciences and from the Dean’s Office of the UNC School of Public Health permitted the Project to experiment with an interactive satellite broadcast of the afternoon sessions from the Institute to approximately 20 downli

nk sites in 13 states and an estimated several hundred participants. After this successful experience, the Institute was relocated from the Rosenau Auditorium to the School’s Mayes Telecommunications Center and renamed the Summer Public Health Research Videoconference and Institute on Minority Health. The morning sessions were provided only to on-site participants and, with financial support from the Dean’s Office, the afternoon sessions were broadcast via satellite. The 1998 Videoconference had 36 sites in 20 states.

After the 1998 Institute, Dr. Edwards took a position at Duke University and leadership of the Project was assumed by Dr. Victor Schoenbach. In 1999, the Project began to produce the broadcast, initially by internet and later by satellite and internet, of the keynote lecture from the School’s Annual Minority Health Conference. When the National Center for Health Statistics grant was completed at the end of 1999, the CDC National Center for HIV, STD and TB Prevention took over as primary sponsor of the Videoconference through the ASPH cooperative agreement and continued in that role through 2005.

When completion of the National Center for Health Statistics cooperative agreement reduced the funding level, the on-site morning sessions were discontinued, so that beginning in 2000 the Videoconference was conducted as a series of five afternoon sessions, with a studio audience comprised primarily of interested persons from the local area. In another major change, however, the $950 downlink site fee was dropped, which contributed to a dramatic increase in the number of downlink sites, from about 30 to well over 100 sites in 42 states plus the District of Columbia. The same format was repeated in 2001 and 2002, again with over 100 sites each time and nearly all states represented. In 2001 and again in 2003, Kaisernetwork.org provided an Internet broadcast of the Keynote Lecture (since 2002 the UNC School of Public Health has provided the Internet broadcast).

In 2000-2002, Dr. Browne and Dr. Schoenbach led the Project jointly. Dr. Browne led a survey of research training needs at minority-serving colleges and universities. In 2002, Dr. Browne left UNC for Morgan State University, where she became professor of public health. The following year, she arranged for Morgan-Hopkins Center for Health Disparities Solutions to co-present the Videoconference and to host the on-site component of the Institute, with local presentations in the mornings and a downlink of the Videoconference in the afternoons. Dr. Browne and Dr. Cynthia Harris, Director of the Public Health Institute at Florida A & M University, organized the Friday session of the Videoconference, which featured research at historically black universities with public health programs.

Videoconference sessions are broadcast in the afternoon (Eastern Time) and generally consist of two presentations. Each presentation is followed by about 15 minutes of live questions from the studio audience and by toll-free telephone, fax, and email from the remote audience. Although audience size is difficult to assess, documented audience sizes have been as high as over 400 persons/day (over 2,000 participants for the week; 700 different individuals). Videotapes of presentations have been used in university classes and health department trainings. 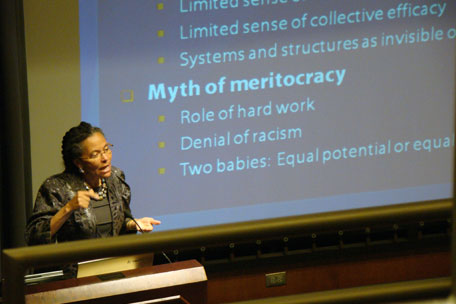 Speakers provide suggested readings, an abstract, and a set of Powerpoint slides for posting on the website and give permission for noncommercial distribution of the satellite and Internet broadcast and videotapes (distributed, since 2005, by the Public Health Foundation (PHF).

In 2004, the Congressional Minority Caucus expressed an interest in participating in the Videoconference. A panel with four members of the Caucus, four reactors at the UNC-CH School of Public Health, and Stephanie Crayton as moderator was organized for the opening Videoconference session. Two of the Representatives were forced to cancel, but on June 21, 2004 the Hon. Madeleine Bordallo and Hon. Donna Cristensen spoke from the House Recording Studio at the Capitol, with Drs. Bill Jenkins, Jennie Joe, Annice Kim, and Fernando Wagner participating from Rosenau Auditorium.

In 2005, the Project collaborated with the Sonja Haynes Stone Center for Black Culture and History to produce the inaugural broadcast from the Center’s newly-dedicated building. Hon. Melvin Watt, Member of the House of Representatives for North Carolina’s 12th district and newly-elected chair of the Congressional Black Caucus, participated on a panel of six health disparities experts, with Stephanie Crayton as moderator. In 2006, the Project returned to the Stone Center to broadcast a panel discussion on “Examining the Science Behind Race Specific Medicine”. With supplemental funding from the Centers for Disease Control and Prevention and a major co-sponsorship from the American Legacy Foundation, the Project and Morgan State University’s new School of Public Health and Policy broadcast a panel on “Tobacco Prevention Initiatives at Historically Black Colleges and Universities” live from Morgan State University.

Recent broadcasts, such as the 2012 webcast on Social Determinants of Health Disparities, have attracted a live audience over 2,000 plus hundreds viewing the recording.