It’s at the heart of public health UNC’s maternal and child health department has a long history of field work aimed at preventing problems related to pregnancy, prenatal health, infant feeding problems, and maternal safety and health. Maternal and child health chair Dr. Herbert Peterson is excited about the department’s focus on implementation science – the study of methods to promote uptake of research findings into routine health care in both clinical and policy contexts.

Implementation science is an integral part of the School’s work as the World Health Organization (WHO) Collaborating Center for Research Evidence for Sexual and Reproductive Health, which Peterson directs.

“We know that 99 percent of all maternal and newborn deaths now occur in developing countries,” Peterson says. “This is largely because the interventions needed to prevent those deaths, used widely in developed countries, are difficult to implement in low-resource settings where most deaths now occur. Addressing these challenges is a new direction that holds great promise.” This infant and her mother participated in a UNC clinical trial for a malaria vaccine in Malawi. (Photo by Caitlin Kleiboer)

Among the strongest new research findings are those in support of achieving exclusive breastfeeding. Four major preventable causes of infant mortality (premature infant death, Sudden Infant Death Syndrome, respiratory disease, infection), as well as obesity and diabetes, can be reduced by breastfeeding, says Dr. Miriam Labbok, director of the Carolina Global Breastfeeding Institute (CGBI). Labbok and her team study and support the “10 Steps to Successful Breastfeeding” (tinyurl.com/10breastfeeding-steps), a system of hospital practices promoted by UNICEF and WHO for quality of care. CGBI research has identified subsets of the steps most associated with achievement of exclusive breastfeeding and has illustrated the positive relationship between the steps and exclusive breastfeeding at the local and global levels. CGBI also has developed and tested a new “10 Steps for Child Care Settings” (cgbi.sph.unc.edu/child-care).

Dr. Margaret E. (Peggy) Bentley focuses on feeding styles and behaviors that lead either to optimal or maladaptive growth and development. Bentley’s research with first time African-American mothers, led by Dr. Megan Slining, then a nutrition doctoral student, was published in 2009 in the Journal of Pediatrics (tinyurl.com/overweightbabies). The research found that overweight and obese infants have motor development delay. Another study, published in Pediatrics and led by current doctoral student Heather Wasser, found that mothers who believed their infants were ‘fussy’ were more likely to feed them foods and liquids at three months of age. (See tinyurl.com/fussy-baby.) “The key message,” Bentley says, “is that it’s important to look at very early caregiver/parenting factors – such as responding to the cues of babies about hunger and satiety and the types of food provided.” Dr. Ilene Speizer knows that family planning is key in preventing maternal deaths. “If you can avoid unintended pregnancies, you can avoid some maternal deaths,” she says. In her role as co-principal investigator and technical deputy director of the Measurement, Learning and Evaluation (MLE) Project, Speizer identifies effective urban reproductive health approaches and interventions likely to have the biggest impact in sub-Saharan Africa and South Asia. MLE is the evaluation component of The Urban Reproductive Health Initiative, a Bill & Melinda Gates Foundation-funded project. The project is in place in Kenya, Nigeria, Senegal and the state of Uttar Pradesh in India.

Reproductive health is important not just for the mother but also for her offspring, says Dr. Jon Hussey. He conducted a study with postdoctoral fellow Dr. Liana Richardson and maternal and child health doctoral student Kelly Strutz, published August 2011 in Annals of Epidemiology (tinyurl.com/birthweight-blood pressure), which revealed an association for males between birth weight and blood pressure in early adulthood. 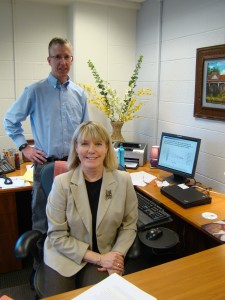 Dr. Carolyn Tucker Halpern examines adolescent sexual behavior patterns and how those patterns relate to reproductive well-being in the transition to adulthood. She draws data from approximately 16,000 people who have been followed from high school to their late 20s and early 30s in the National Longitudinal Study of Adolescent Health.

Data presented at the Society for Research on Adolescence in March 2012 showed that teenagers who began their sexual activity with oral sex but waited at least one year before vaginal sex had a 9.5 percent chance of teen pregnancy. That compared with a significantly higher 28 percent probability of teen pregnancy for teens whose first sexual experience was vaginal sex, controlling for multiple potential confounders. These findings point to the value of comprehensive sex education. Dr. Stephanie Engel considers impact of environmental exposures on adverse pregnancy outcomes and neurodevelopmental impairment in children. At Mt. Sinai Medical Center and now at UNC, she investigates the role of exposure during pregnancy to chemicals commonly found in consumer products such as shampoo, deodorant, medications and cosmetics. A 2010 study published in Environmental Health Perspectives (tinyurl.com/prenatal-exposures) links prenatal exposure to phthalates commonly found in personal care products to more ADHD-like behavior in children ages four to nine. “The literature is still very new,” Engel says, “and we don’t know yet whether these chemicals will cause harm or not. The good news from a public health perspective is that you can limit exposure to them until you know they are safe.”


Researchers featured in this article include: