The fight against Ebola .
Gillings School alumni, students and faculty members are playing a part in the global fight against Ebola, both in West Africa’s Ebola treatment centers and in the U.S.

The Ebola Information Portal (sph.unc.edu/global- health/Ebola), catalogued by the Gillings Global GatewayTM and first posted in October 2014, aggregates information about the Ebola outbreak and preparedness efforts by local, state, federal and global agencies as well as by UNC. Naya Villarreal, MPH, program coordinator for the Gateway, says the portal serves as an excellent resource for information about the Ebola epidemic.

“Leaders at the Gillings School wanted to centralize information, not only from UNC but also from the Centers for Disease Control and Prevention (CDC), World Health Organization (WHO) and other national and international organizations,” Villarreal says.

The portal provides regular updates on Ebola efforts throughout the world and describes ways in which Gillings School faculty members, students and alumni help, both in treatment and prevention of the disease. A local man oversees a funeral for an Ebola victim in Sierra Leone. (Photo by Richard Brostrom)

Alumni are in West Africa, experiencing Ebola on the front lines.

Saye Baawo, MD, who earned a Master of Science in Public Health degree in maternal and child health from the Gillings School in 2006, is assistant minister for curative services in Liberia’s Ministry of Health.

“When I was assigned to work in Margibi (Liberia) as the Ministry of Health’s technical assistant on the Ebola response, there was no organized system in place to deal with Ebola,” says Baawo. “This is because the disease was new, and many health workers were afraid to get involved in the fight.”

With the support of Baawo and colleagues, a rapid-response system was put into place. The system includes training of health staff members and community health volunteers to educate communities, counsel affected families and trace people who have come in contact with those who have the disease.

Elizabeth Whelan, PhD, who earned master’s (1987) and doctoral (1992) degrees in epidemiology from the Gillings School, is now a branch chief at the CDC. Whelan says that her time at the School was critical to her ability to assist with the Ebola response.

“My epidemiology degree from the Gillings School was essential to my work [in Sierra Leone],” she says. “It was gratifying to be part of the public health response to such a terrible situation. Sierra Leone was ravaged by a 14-year civil war and was just starting to rebuild when Ebola hit. The case count is still going up, health-care workers are getting sick and the health-care infrastructure is not at all close to Western standards.” 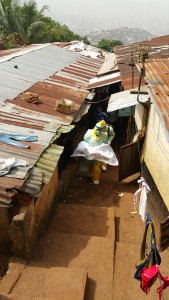 A two-year-old who died from Ebola is carried from home to the cemetery by workers in protective gear. (Photo by Richard Brostrom) At the Connaught Hospital in Freetown, Sierra Leone, makeshift tents are set up for screening people with Ebola symptoms. (Photo by Richard Brostrom) A clinic worker in Liberia sanitizes his hands at a chlorine hand-washing station. (Photo by William Brieger)

Richard Brostrom, MSPH, a 1987 alumnus and now the Pacific regional tuberculosis field medical officer in the CDC’s Division of Tuberculosis Elimination, provided assistance with infection prevention and control as well as case management.

“For some, providing assistance in West Africa for the outbreak is done with intense clinical management of Ebola cases at the Ebola treatment centers,” says Brostrom. “For most of us, though, the effort is focused on applied epidemiology, early case-finding, isolating infectious cases to minimize family exposures, and finding effective and culturally appropriate public health messaging to eliminate the traditional funerals that have fueled continued cases in West African communities. These are the basics of community-based epidemiology taught at the Gillings School, and they represent the current challenges for the global response now in full swing.” Above, alumna Dr. Elizabeth Whelan (second from left) poses with members of a CDC and WHO team in Sierra Leone. Alumni Richard Brostrom and Dr. Cynthia Cassell also are engaged in the CDC’s response to Ebola in West Africa. Cassell serves, in her own capacity, on the School’s Public Health Foundation board.
.


The promise of prevention and cure The infectious diseases prevention and control research of two UNC Gillings School professors is an important component of understanding and stopping Ebola. In a study funded by the National Science Foundation, Mark D. Sobsey, PhD, Kenan Distinguished Professor in the School’s environmental sciences and engineering department, studies whether the severe diarrhea of Ebola patients is contaminating local water and sewage systems.

“The results of this study will make it possible to design and implement effective onsite management systems and protocols to reduce the risks of spreading the virus from people sick with Ebola by way of their feces and sewage,” Sobsey says. “This is especially important for people who work with sewage systems or who come in contact with this waste before it reaches a sewage treatment plant.” Ralph Baric, PhD, professor of epidemiology at the Gillings School and of microbiology and immunology in UNC’s School of Medicine, worked with colleagues to develop a new genetic strain of mice that significantly will improve researchers’ ability to test the efficacy of potential Ebola vaccines and treatments. A study published in Science magazine in October 2014 describes how Baric and colleagues solved an important challenge facing any researcher seeking to prevent or cure Ebola — namely, mice lines traditionally used for pharmacological and medical research do not develop human disease phenotypes.

“You can’t look for a cure for Ebola unless you have an animal model that mimics the Ebola virus disease spectra,” says Baric. “For the first time, we were able to produce a novel platform for rapidly developing new mouse models that replicate human disease for this virus, as well as other important emerging human pathogens.” My teaching experience has shown that it is particularly valuable for students to hear directly from practicing health professionals about how the principles of epidemiology and public health practice are applied to real-world issues. UNC is fortunate to have faculty members and alumni with recent experience with the Ebola outbreak who are willing to share their stories. In this way, students learn how such an event has both a local and global impact. Financial support from the CDC-funded Preparedness and Emergency Response Learning Center (PERLC) at the N.C. Institute for Public Health allowed us to organize and deliver these seminars both in-person and via the Web. [See nciph.sph.unc.edu/tws/webinars.php.]

The seminar series initially was designed as a learning opportunity for Gillings School residential and online students. However, our PERLC funding allowed us also to offer the series to the broader public health practice community across the state. I was deployed with the International Infection Prevention team to Lagos, Nigeria, and the Emergency Operations Center in Atlanta, Ga., in support of the CDC’s West Africa Ebola response. I took away some important lessons from my experience — including that creativity and flexibility in resource-poor countries is instrumental to the success of the mission; building relationships is key to having an impact upon the disease; and there is no greater fulfillment than helping one’s fellow human beings, particularly during a crisis.