There was no question about the choice of décor at the annual World of Difference dinner last fall. After all, the event, held Nov. 29, 2012, to celebrate donors who give $1,000 or more annually to the School or its academic units, was held during the first year of the University’s two-year, campus-wide “water” theme. It was also the year in which Don and Jennifer Holzworth, intent upon strengthening the efficacy of The Water Institute at UNC, endowed a professorship awarded to the Institute’s director, Dr. Jamie Bartram. 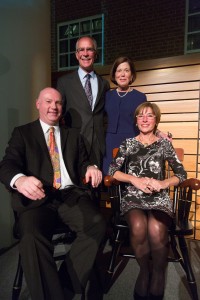 In a mise en scène engineered by event planner Jerry Salak, white hydrangeas and sparkling beads that appeared to be water drop¬lets graced the round, teal-draped tables. A light show designed by Maestro Productions featured images of water rivulets on the white columns in the atrium. The program cover included a photograph by Dan Sears, in which the Old Well is reflected in a series of raindrops. Even the menu spoke to the theme – a Tuscan vegetable soup called acquacotta (“cooked water”), salmon and poached pear.

Dean Barbara K. Rimer officially recognized Bartram as Holzworth Distinguished Professor at the dinner, and he and his benefactors were presented with University chairs.

Among the attendees were members of the School’s Rosenau Society (who give an annual $1,000 or more in unrestricted funds), Cornerstone Society (who give $25,000 or more to the building fund, naming rooms and spaces), and those alumni and friends who have established endowed professorships, fellowships, scholarships and specialty funds.