Jimmy Rosen: A chance encounter led him to his long-term mentor

James Rosen, MBA, MSPH, never worries about being bored. He’s always juggling a half-dozen projects. From his years on Wall Street to founding entrepreneurial companies, he challenges himself to make innovative contributions for the benefit of others. As chair of the Gillings School’s Public Health Foundation board, Rosen has used his boundless energy and business acumen to advance the School’s mission and improve opportunities for its faculty members and students.

Part of his motivation to serve the Gillings School, he says, has to do with his passion for public health and his gratitude for the opportunities he had while earning his master’s degree at the School. Another part, though, is serendipitous.

In the early 1990s, after earning a bachelor’s degree in public policy at Duke University, he left for Colorado, where he started a financial analytics business and immersed himself in learning about emergency medical services. He accrued more than 1,000 hours of search-and-rescue and paramedical training and planned to be a health care provider – until he realized he was most interested in health care research.

So he decided to switch careers.

Returning to North Carolina, he began knocking on doors at Duke.

“Everywhere I called, people turned me away,” Rosen says. “They said I lacked experience in scientific research. One remarkable person was interested in hearing my story. She gave me several good leads, but none of them panned out.”

Later, walking around the Duke campus, Rosen dropped by the woman’s office to thank her for her suggestions. She invited him in, and they talked for nearly an hour. At the end of the meeting, she offered him a job – entering data for a breast cancer study.

The woman was Barbara K. Rimer, DrPH, then director of cancer prevention, detection and control research at the Duke Comprehensive Cancer Center, now dean at the UNC Gillings School. They established a lasting relationship that would influence Rosen’s career for years to come.

When Rimer was at the National Cancer Institute (NCI), Rosen supported her as an independent contractor before heading to Wall Street to try his hand in health care finance.

After three years in New York, he realized that his work was more distant from scientific research than he wanted, and he emailed Rimer at NCI to let her know he was heading back to North Carolina.

For a third time, their paths crossed, and Rosen worked with Rimer at UNC Lineberger to launch a research project. 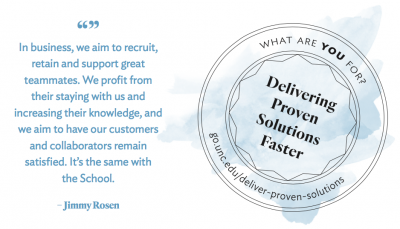 He also made time to enroll as a public health student, obtaining dual Master of Science in Public Health and Master of Business Administration degrees in 2007. By then, Rimer had been selected as the public health school’s dean.

“Walking across the stage at commencement to receive a public health degree from Barbara was among my greatest pleasures,” Rosen says. “My affinity for public health had come full circle.”

After he graduated, the dean contacted Rosen and asked him to serve on the Gillings School’s Public Health Foundation board.

“Serving as a board member and chair has been rewarding,” Rosen says. “Everyone brings unique gifts to the table. Faculty members are knowledgeable about public health priorities and local and global needs. Alumni bring context to the work the School does. Alternate perspectives – from industry, health care providers, and leaders in state, local and federal agencies – all enrich the conversation.”

Rosen says that growing a business is similar to advancing the mission of the School.

“In business, we aim to recruit, retain and support great teammates,” he says. “We profit from their staying with us and increasing their knowledge, and we aim to have our customers and collaborators remain satisfied. It’s the same with the School. Especially in this time of declining state and federal support, we need to attract and keep talented faculty and provide opportunities to our outstanding students. Students are our customers. We want to encourage them – and equip them with all the skills they need to be successful.”