The Brendle brothers, born in Statesville, N.C., served their country proudly. During World War II, Clell was an Army staff sergeant, and Paul was a Navy chief petty officer. Jim, the youngest, was an Army sergeant during the Korean conflict.

Years later, their sister’s son, Fred Brown, followed in their footsteps, first as an Army captain for three years, and then for three decades, as a colonel in the N.C. Air Guard/U.S. Air Force. He was on active duty for nine months during Operations Desert Shield and Desert Storm.

Now Brown, who earned a master’s degree in public health administration from UNC’s public health school in 1981, and his wife, Laura, have established the “Brendle Brothers Scholarship for Veterans.”

“We’ve basically been at war for the past 20 years,” Brown says. “Many veterans coming back want to pursue graduate
degrees. Public health needs men and women who are dedicated and know how to get the job done. This seemed like a
great way for us to honor my uncles and all veterans – and to give back to UNC.”

The scholarship was announced at the School’s first 75th anniversary event in Charlotte, N.C. The event was sponsored by Carolinas HealthCare System, where Brown is group senior vice president.

Brown is devoted to Carolina, especially to the Gillings School of Global Public Health. He is an adjunct health policy and management faculty member and frequent guest lecturer. He has served as president of the School’s Public Health Foundation board and on numerous alumni committees. Currently, he chairs the 75th anniversary campaign.

Other alumni also are supporting the celebrations, which will be held in various locations over the next three years.
Among them are Roy Ramthun, MSPH (HPM, ’87), who chairs the Public Health Foundation’s campaign cabinet
(planning committee), and Deniese Chaney, MPH (HPM, ’90), who chairs the anniversary programs committee. (See more about Chaney on page 42.)

Learn more about the School’s anniversary events on the inside back cover of this issue and at www.sph.unc.edu/alumni/75.
—Ramona DuBose 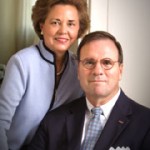 “Many veterans coming back want to pursue graduate degrees… The scholarship seemed like a great way for us to honor my uncles and all veterans – and to give back to UNC.”
—Fred Brown