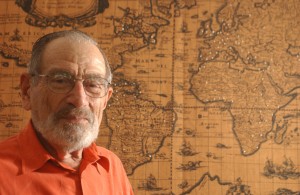 There were periods during the summer when clean, drinkable water was not available to meet the demands of the villagers. More and more people needed water to drink, bathe in, wash clothes—but their demand for water was greater than the nearby lake could provide.

You may think this story begins in a remote area of the world. That’s not the case. The village was Chapel Hill, North Carolina, in the late 1960s.

Daniel Okun, PhD, former Kenan Distinguished Professor who chaired the UNC public health school’s environmental sciences and engineering (ESE) department from 1955 to 1973, recognized the water scarcity problem as early as the mid-1950s. Local leaders weren’t listening, though. It took a crippling drought in 1968 to grab the attention of University leaders—and every politician between Hillsborough and Raleigh.

“It was so bad, there was talk of the football season being cancelled,” said Okun, in a 1985 interview. “Anything else doesn’t matter, but when you can’t play football…!”

Okun said the football threat started decision makers listening and talking. The more he heard, however, the more he was sure that no one had found a workable solution.

Okun knew—better than most—the validity of what was being proposed and considered. He had arrived at UNC in the 1950s, and before his death in 2007, he would travel to 89 countries, helping populations large and small gain access to clean, sustainable water resources. Some of his most important and impactful work, however, was the result of his and his students’ efforts, virtually in their own backyards.

What happened next represents only one of hundreds of ways faculty members and students at UNC’s Gillings School of Global Public Health have used knowledge and experience they gained globally to help people locally in North Carolina.

In 1968, the sole source of non-well water for Chapel Hill and much of Orange County, N.C., was University Lake. Many seemed to favor a proposalthat integrated University with Jordan Lake—either by connecting the aquifers or piping Jordan Lake water into University Lake.

“The problem there is that you’re taking a very good lake (University) and putting very bad water (Jordan) into it,” said Okun in the 1985 interview. 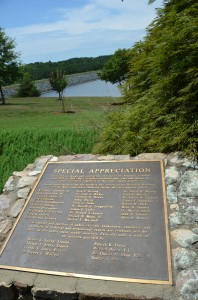 Today, Cane Creek Reservoir is both a pristine source of drinking water and a well trafficked recreational area. A plaque commemorates Dr. Dan Okun’s contributions to planning and developing the reservoir.

Every year, Okun directed his students to collect data about the Chapel Hill water supply. He was sure they had identified a new and better source of high-quality water—Cane Creek.

Better yet, building a reservoir and dam using Cane Creek offered the opportunity to triple available water resources by creating an aquifer larger than University Lake, one that could be enlarged as demand grew.

“The maximum yield for about 30 square miles is about 10 million gallons of water a day,” Okun said. “We had about three [million] from University Lake, and if we enlarged that, we’d get about ten. Going to Cane Creek, we get a new ten because it’s a different watershed.”

Okun and his students ultimately convinced UNC’s board of trustees that Cane Creek was the optimum long-term solution to the region’s burgeoning water needs. Even with Okun’s significant expertise behind the proposal, several legal challenges prevented the plan’s quick implementation.

“They took their interests to court, which extended construction of Cane Creek Reservoir by almost a decade, raising its cost,” Okun said. “But now we are assured of having high-quality water for the foreseeable future.”

The work of Okun and his students, aimed at bringing clean water to communities locally and around the world, continues today at the Gillings School.

Gregory Characklis, PhD, ESE professor and director of the UNC Institute for the Environment’s Center for Watershed Science and Management, has pioneered economical methods of water supply that dramatically can reduce the effects of droughts at one-tenth the cost and time of creating new reservoirs. A new National Science Foundation grant will allow him to go even further in developing these and other methods.

Kenan Distinguished Professor Mark Sobsey, PhD, has co-developed economical clean water purification systems and a Ziploc-bag-sized, inexpensive test for microbial water-quality analysis. Both efforts have led to entrepreneurial ventures—WaterSHED and Aquagenx—which have been supported by the World Health Organization. His work influences state, national and global policy on water, sanitation and health.

Jacqueline MacDonald Gibson, PhD, associate professor of ESE, also has taken modeling and analysis into the policy world. Her efforts focus on the sources and impacts of environmental contamination upon human health and the development of policy proposals aimed at stemming pollutants and treating their effects.

In 2013, MacDonald Gibson received a prestigious research scientist development award from the Robert Wood Johnson Foundation to study disparities in water, sanitation and hygiene service access. A central focus of the project was the historically African-American Rogers Road/Eubanks neighborhood in Chapel Hill, where a landfill has caused health risks for the residents. This traditionally  has been an area of Chapel Hill in which residents have not received access to public utilities, including water services. Jill Stewart, PhD, ESE associate professor, has conducted this type of study internationally—in the Galapagos Islands.

Stewart is associate director of UNC’s Center for Galapagos Studies, a partnership with the Universidad San Francisco de Quito, in Ecuador. The center advances conservation efforts in the Galapagos and promotes better understanding of ecologically sensitive and protected areas worldwide.

Perhaps the most significant evolution in the School’s leadership in promoting science, technology and policy aimed at increasing access and availability to clean water was the establishment in 2010 of The Water Institute at UNC, a transdisciplinary effort based in the ESE department, with start-up support from the Gillings gift and long-term salary support for the director committed by Erskine Bowles, MBA, then president of UNC.

“The Gillings School has an amazing track record of success at the junction of public health, water and sanitation,” says Jamie Bartram, PhD, Don and Jennifer Holzworth Distinguished Professor of environmental sciences and engineering and director of The Water Institute. “Our vision is to break the boundaries that constrain problem-solving by bringing together disciplines and sectors to confront some of mankind’s most critical challenges, whether at the local, national or global level.” 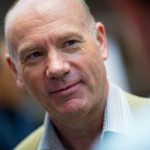 Bartram’s leadership at The Water Institute was instrumental in UNC’s unique decision to focus on water issues as a cross-campus, two-year theme, a program which Bartram co-leads. (See watertheme.unc.edu.)

Bartram’s hiring as the Institute’s founding director also brings an almost perfect symmetry to the lineage of excellence and leadership in water research, teaching and implementation science at the Gillings School.

The Gillings School also is a long-time leader in the area of that other vital resource—air.

Perhaps the greatest example of that leadership—literally, theoretically, functionally and educationally—is the UNC Dual Outdoor Gas Chamber, or as it’s known more commonly, “the smog chamber.” 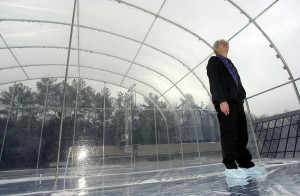 ESE professor Rich Kamens is shown in the the smog chamber experiment site in Chatham County. Kamens uses the chambers to study particulate matter in smog.

Its existence can be traced to the passing of President Nixon’s Clean Air Act in 1968, but its legacy goes back even further, having been established by Lyman Ripperton, PhD, professor in the UNC School of Public Health’s Department of Sanitary Engineering beginning in 1958.

Ripperton’s specialty was atmospheric chemistry. When the newly determined U.S. Environmental Protection Agency (EPA) established measurements for air pollution, the focus was upon the quantity of pollutants in the air, rather than the interactions those pollutants may have with the sun and atmosphere. Many atmospheric scientists took issue with this, especially those in the gas-phase atmospheric chemistry field, which included Ripperton and one of his outstanding doctoral students, Harvey Jeffries.

By 1972, the EPA became intrigued enough to study in situ the ideas proposed by the atmospheric chemists. Doing so would require sampling polluted air from dozens of cities throughout entire days under controlled conditions—a virtual impossibility. However,

EPA scientists believed that a specialized facility might be able to recreate city-specific conditions in a single location. They also had a good idea who could make such a facility happen—namely, Ripperton and his team, which included Harvey Jeffries, PhD, as a new faculty member.

Or rather, he built two such structures.

Drs. Will Vizuete (left) and Ken Sexton describe the workings of Quantaire, a portable air-sampling device they developed.

Another similar chamber was built on the roof of the UNC School of Public Health in 2002. These unique study devices are among the only ones of their kind in the world for analyzing effects of sunlight on gases and aerosols—especially diesel and gasoline emissions from motor vehicles—over specific lengths of time in conditions that replicate virtually any rural or urban location on the planet. Refinements allow scientists to study direct effects of these emissions on lung tissue. The smog chambers and the faculty expertise that brought them into being has made UNC’s Gillings School the go-to place for atmospheric scientists specializing in helio-chemistry, advanced process analysis of results for regulatory issues, and health and environmental policy.

Recently, Jeffries and Sexton partnered with William Vizuete, PhD, associate professor of ESE, and Glenn Walters, PhD, director of the ESE Design Center—as entrepreneurs. Their efforts have produced the Quantaire, a portable instrument for sampling and biologically assessing particulate matter, outdoors or in, for potential toxic effects. (See quantaire.com.) Vizuete, Sexton and Walters also have designed and built the Gillings Sampler, an electrostatic air sampler that serves as an alternative method for aerosol in vitro exposure studies.

Complementing these efforts, the Gillings School continues its leadership in other efforts focused on understanding and remediating pollutants in the air, ground and water that impact human health, and on policy issues aimed at preventing further pollution.

Two faculty members are among those who study the impact of heavy metals upon human health. Rebecca Fry, PhD, ESE associate professor, studies ways that arsenic, cadmium and lead affect human prenatal development. Orlando Coronell, PhD, ESE assistant professor, examines membrane technologies as an effective way to filter metals from drinking water, both at the treatment plant and at point-of-use.

“The environmental problems we face today, both in North  Carolina and globally, are no less challenging than the problems faced by our predecessors when  the School of Public Health was founded 75 years ago,” says Aitken.

…many of them are even more complex, reflecting the knowledge gained over the decades in both the nature of the problems and the ways they can affect human health. Our faculty members and students are motivated to understand and solve these problems, and they will continue to lead their respective fields while carrying on a tradition of excellence that UNC and the Gillings School are known for.