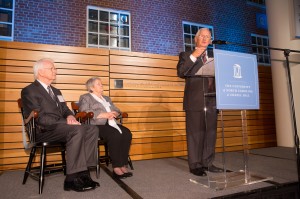 A 1936 summer short course in public health dentistry was among the first offerings of the UNC school of Medicine’s Division of Public Health, which later became the School of Public Health. The course helped strengthen and sustain an oral hygiene program that reached public schools across N.C.

Today, Gillings School faculty members, with partners from the School of Dentistry and others, continue the legacy of dental public health impact in North Carolina and across the U.S. The “Into the Mouths of Babes” program, developed by Gary Rozier, DDS, professor of health policy and management, and others, began in 2000 as a randomized trial to test the potential benefit of training pediatricians to apply fluoride to children’s teeth. A strong evidence base shows that the program reduces dental caries (and related treatment and costs), averts hospitalizations and improves oral health among vulnerable children. The program reached 130,000 children in N.C. last year—and 35 other states have adopted N.C.’s model.

“It is a great innovation—the kind that makes a real difference for children, families and communities,” says Dean Barbara K. Rimer, DrPH. “and looking toward the future, the new R. Gary Rozier and Chester W. Douglass Distinguished Professorship in Dental Public Health ensures that this tradition of public health dentistry in the School will continue for the foreseeable future.”—Elizabeth French